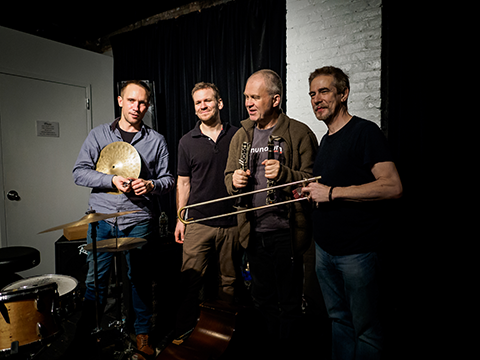 
“Gjerstad is a choice elicitor of out-of-the-ordinary elocutions, refusing gadgetry and reed-fueled bric-a-brac in favour of a strong sense of asymmetrical melody, trawling the improbable waters of curvilinear liberty in search of the most disparate notes, looking for composure while surrounded by havoc,” writes Paris Transatlantic Magazine about the Norwegian trumpeter and saxophonist Frode Gjerstad.


Steve Swell has been an active member of the NYC music community since 1975.  He has toured and recorded with artists as musically diverse as Lionel Hampton, Buddy Rich, Anthony Braxton, Bill Dixon, Cecil Taylor and William Parker, has released over 40 CDs as a leader or co-leader and is a featured artist on more than 100 other releases. Paal Nilssen-Love, who has collaborated with Gjerstad since he was 15 years old, has worked with Ken Vandermark, Joe McPhee and Mats Gustafsson, among others.. Johnny Ruun has worked with Gjerstad's Circulasione Totale Orchestra on numerous occasions. Gjerstad’s trio with Ruun and Nilssen-Love was his first with all Norwegian musicians. Since 2010 they’ve released three live recordings – MIR, East Of West and HideOut. Swell expanded the group both in membership and nationality for its most recent release, At Constellation (Circulasione Totale, 2015).