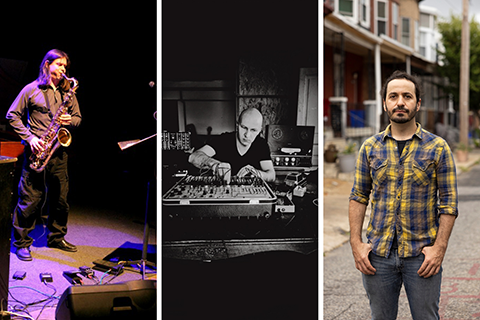 Bowerbird is pleased to present Franck Vigroux and Ulrich Krieger performing Dodécaèdre, a new piece for electronics and amplified-processed saxophone at The Rotunda. Made of tectonic tensions, beats, and electronic textures the new work is a very personal approach to sonic exploration. Opening the evening will be a solo set by Philadelphia-based multi-instrumentalist Julius Masri.

Ulrich Krieger is well known as a saxophone player in contemporary composed and free improvised music as well as a composer of chamber music and electronic music. His recent focus lies in the experimental fields and fringes of contemporary Pop culture: somewhere in the limbo between Noise and Heavy Metal, Ambient and Silence. His original compositions go back and forth between Just Intonation, Silent Music, Noise, Instrumental Electronic, often asking for elaborate amplification, and works in the limbo of Rock culture – not accepting stylistic boundaries. Krieger developed his own, often amplified style of saxophone playing, he calls ‘acoustic electronics’. He uses refined acoustic, quasi-electronic sounds, which then get processed, the saxophone often becoming more an ‘analogue sampler’ rather than a traditional finger-virtuoso instrument. By amplifying his instrument in various ways, he gets down to the ‘grains of the sounds’, changing their identity and structure from within.

Franck Vigroux is a multifaceted artist whose works range from experimental electronic music to modern composition and music theatre. Franck Vigroux‘s music is made of tectonic tensions, beats, electronic textures and a very personal approach to sonic exploration. He is equally prolific as a solo artist and as a collaborator, he has worked with musician such as Elliott Sharp, Mika Vainio, Reinhold Friedl, Ars Nova… Vigroux’s uniqueness comes from his artistic approach that integrates new media and performance arts. He designs transdisciplinary shows and audiovisual concerts, collaborating with visual artists such as Antoine Schmitt and Kurt d’Haeseleer.

Julius Masri is a Philadelphia based multi-instrumentalist, performer and composer for the city’s dance community at large. His music focuses on improvisatory methods and syncretic/ linguistic/ somatic exchanges within various musical languages including Jazz, Metal, AfroCuban, Experimental Noise, and Arabic music. Born in Tripoli, Lebanon, he moved to the States in 1990 and began studying with Philadelphia instructors Carl Mottola, Elaine Hoffman-Watts, and as an undergraduate at Bard College, with AACM’s Thurman Barker, Richard Teitelbaum, and Joan Tower. Julius plays drums, circuit modified Casio keyboards, Oud, Kamancheh (aka Rabab, Spike Fiddle), and various other instruments. In November 2021, Julius released the album “The Arabic Room” under the project name Mephisto Halabi, garnering international praise in music publications and websites including WIRE Magazine (Dec2021), PopMatters, Radio al-Harra, Foxy Digitalis, and many others.

This is an “in person” event. Bowerbird is requiring all those attending to show proof of COVID 19 vaccination status (vaccination card or legible photo on your smartphone, plus photo ID) and wear a mask during the entirety of the event. There will be no exceptions to this policy. Capacity will be limited – advanced registration is strongly encouraged. pay what you wish. Please register at https://www.eventbrite.com/e/franck-vigroux-ulrich-krieger-julius-masri-tickets-246821980187

Dodécaèdre / the island has been made possible through Jazz & New Music, a program of Villa Albertine and FACE Foundation, in partnership with the French Embassy in the United States with support from the French Ministry of Culture, Institut français, SACEM (Société des auteurs, compositeurs et éditeurs de musique) and the CNM (Centre National de la Musique).