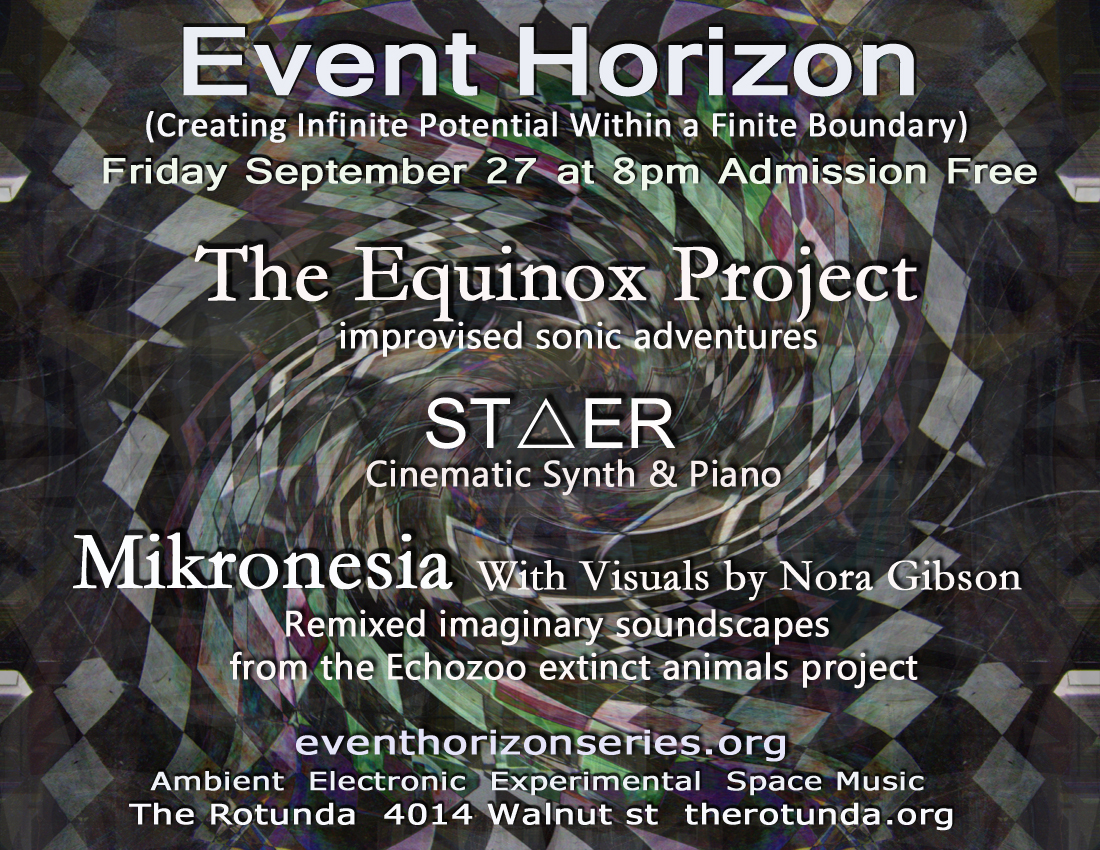 ST∆ER is the solo project of Philadelphia-based electronic musician Ian R. Staer. From the debut of the project in 2014, ST∆ER has enjoyed strong support from fans and critics alike: multiple live-to-air FM radio performances (including Star's End on WXPN FM and Music With Space on WPRB FM) and well-received concerts including an appearance at The Gatherings have rapidly cultivated a following for this independent artist, whose releases have regularly found their way to the top of the Bandcamp charts -- sharing top-5 positions with (and even occasionally surpassing) luminaries like Carbon Based Lifeforms and Tycho.

Inspired equally by the classic “Berlin School” material of early Tangerine Dream and by contemporaries such as Chuck Van Zyl, Erik Wøllo, and Jason Sloan, ST∆ER performances take the audience on a meditative, hypnotic journey. Percolating, shimmering sequences intertwine within swirling clouds of chorused strings, themselves bound within the gravity of deep, powerful drones. Gentle piano lines drift throughout, imbuing the synthesized atmospheres with an organic familiarity.

ST∆ER releases are available in physical and digital format at http://staer.bandcamp.com

Mikronesia - Composer and teaching artist Michael Reiley McDermott has created music for video, dance, theater, concerts, gallery installations, smartphones, multi-speaker arrays, kinetic sculptures, wishing wells, and sleeping/dreaming across the spectrum of listening consciousness. His practice explores the relationship between present moment awareness, deep time and humanity’s personal connection through listening.  Much of his work integrates a daily practice of meditation, Deep Listening and textured sound worlds through a process he calls “sonic photography”. This process involves site-specific recordings of physical spaces re-imagined using photographic development and collage techniques. His aim is to reframe the everyday world as both a grand statement that stretches out in both directions of time and as an ephemeral instant of precious connection. In 2016 he completed a certification program in Deep Listening studying with Deep Listening pioneer Pauline Oliveros.

He was recently Artist in Residence at <fidget>, Composer in Residence for Temple University’s BEEP Ensemble and Composer in Residence at Village of the Arts and Humanities.  Over the past four years, he has been traveling at artists residencies around the world in Brazil, Iceland, Germany, Mexico, Costa Rica, Thailand, and India working on a sound design project of extinct animal sounds called Echozoo and teaching with his Deep Listening and Somatic based workshop called Listening Bodies. Michael is currently a teacher at the Center for Deep Listening at Rensselaer Polytechnic Institute and studying to become a certified therapeutic musician with the Music for Healling and Transition Program. Mikronesia will be joined by visualize Nora Gibson for this performance.

Harrison McKay is perhaps best known as the guitar half of The Tangent Project, the Philadelphia area synth & guitar duo who

over the past decade have graced the stages of all the region's important electronic spacemusic venues. He coaxes an extended pallet of sounds from his guitar through the use of synths, effects processors and loopers. In addition to his work with The Tangent Project and as a solo electronic musician, McKay has performed extensively with local pop and progressive rock bands.