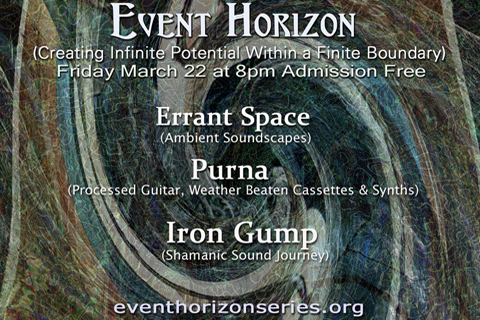 Errant Space is a project of composer/recordist Craig Chin. Its primary goal is environmental enhancement through sound. Performances are site-specific, spontaneous compositions influenced by both the physical characteristics of the space they are performed in and the occupants of that space. Craig also produces the Errant Space Podcast which has featured solo performances as well as collaborations with other sonic explorers. It has been posted monthly since 2015. Find it and other recordings at http://www.errant.space/.

Purna is the east coast based trio of Elliot Perry, John Laslo and Shawn Maguire.  Formed as an ambient writing project in 2016 they released their first full length “Grachiel” on AM 800 Sound last year. Stripping compositions down to merely a chord;  Purna compiles guitar and synth drones, weather beaten cassettes, and found sounds to create their dense, foggy soundscape.

Jason Sloan is an electronic musician, composer, and sound artist practicing in Baltimore, Md. His work explores immateriality and its relationship to memory, systems and the virtual world. Besides his notoriety in the ambient and space music scenes for close to two decades, Jason has released over a dozen solo albums, collaborations and has been included on multiple various artist collections. In 2012 Jason began working under the moniker L’Avenir. This project explores Sloan’s long time love of dark synth and minimal wave music. L’Avenir’s music is created purely from analog, modular and/or vintage synthesizer equipment and has released multiple albums on Barcelona’s Cold Beats Records, Germany’s Eins:Zwei:Acht and Beläten in Sweden. Sloan received his BFA from Edinboro University and his MFA from Towson University.  Locally, Sloan has been the recipient  multiple Maryland State Arts Council’s Individual Artist Awards. His installations, net.art, video art and documented performances have been exhibited internationally in cities such as Berlin, Copenhagen, Edinburgh, Kiev, Nagoya, Saint-Petersburg, Toulouse, Lisbon, Uden and Vienna. In addition to releasing over a dozen studio albums and E.P.’s over the last decade, Sloan has played live all over the US, Canada and Europe including the influential Live Constructions radio program at Columbia University, Berlin’s Liquid Sky TV, STEIM in Amsterdam, CMMAS in Morelia, and Philadelphia’s The Gatherings concert series; one of the country’s oldest continuing ambient and electronic music series. Sloan is a Professor teaching full-time in the Interactive Arts department in addition to being the program director of the Sound Art program at the Maryland Institute College of Art in Baltimore, Maryland.