Indrajit Roy-Chowdhury on sitar and Mir Naqibul Islam on tabla 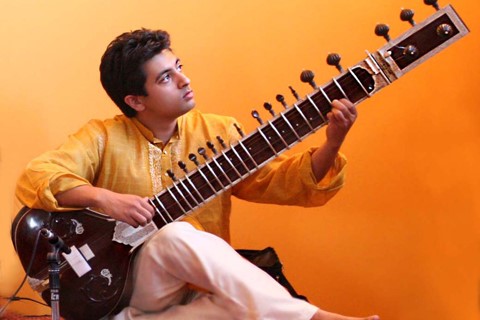 Indrajit Roy-Chowdhury is a disciple of the sitar maestro Pandit Subroto Roy-Chowdhury. Groomed in the Veen-kar style of the Senia Gharana, which maintains the Dhrupadi origins of Indian Classical music, Indrajit strives to innovate while keeping a firm connection with the past. While completing his undergraduate studies at Duke University, Indrajit received the Bennenson Award for the Arts to further his study of Indian Classical music. Since then he has taken the profession of a full-time sitarist and has performed on stages across the world including such prestigious venues as Gyan Mancha (Kolkata), Hammerstein Ballroom (New York), Kennedy Center (Washington D.C.) and has had his concerts telecast by Doordarshan (Indian National Television). During the 2010 Fall semester Indrajit was a visiting faculty member at the University of Pennsylvania and taught the University’s sitar course.

Indrajit will be accompanied on tabla by Mir Naqibul Islam: An avid student of Tabla, Mir has trained in the traditional guru-shisya style of Indian Classical music from Pt. Ashoke Paul, disciple of the great tabla guru Pt. Jnan Prakash Ghosh. Now living and working in New York city, he performs regularly with musicians from a wide variety of other genres, bringing tabla to Jazz, Middle-Eastern music and other contexts. By listening, learning and playing with musicians from around the globe, Mir is developing a unique musical aesthetic bringing together the musical influences of traditional Farukhabad style tabla and 21st century New York. Mir have studied with Pt. Gopal Mishra and Pt. Suresh Talwalkar in past and continuing his talim with the great Farukhabad Mastero Pt Anindo Chatterjee.

Admission is FREE but donations for the artists are encouraged. More info on this event can be found HERE