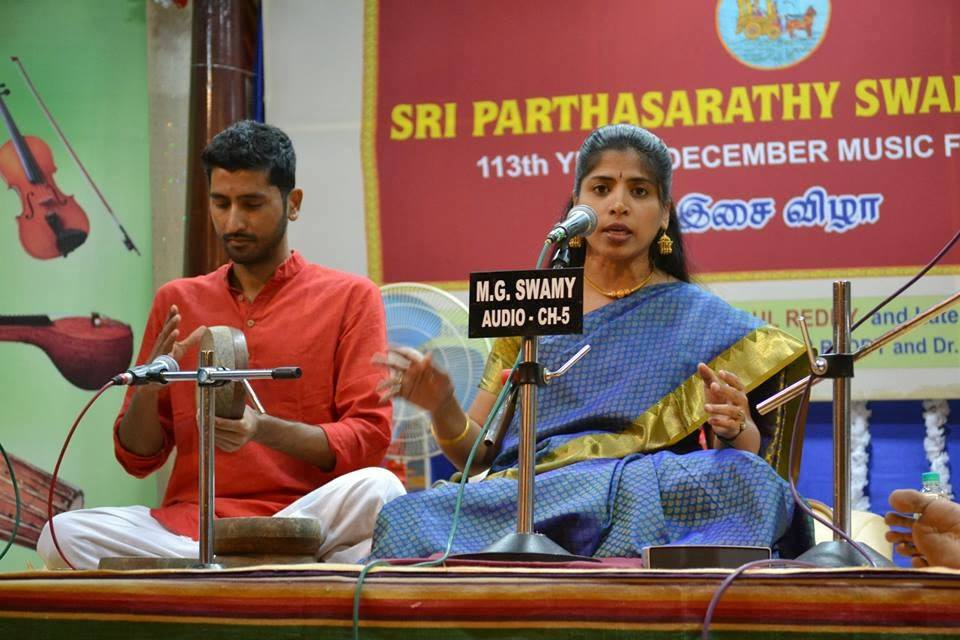 Kiranavali Vidyasankar:
By age two Kiranavali Vidyasankar was hailed as a child prodigy, being able to identify over 200 ragas (melodic scales), demonstrate the 175 talas (rhythmic cycles) and answer numerous other technical questions pertaining to Carnatic music. The Indian Express (June 14, 1975) declared her to be “astounding in her precocity”, while The Hindu (June 1976) wrote, “More fantastic is the manner in which 3-year old Kiranavali is able to tell the raga even at the commencement of its outline.”
Kiranavali’s father, Narasimhan, an outstanding musician and teacher, and son of the renowed Gotuvadyam Narayana Iyengar, saw Kiranavali’s potential even as a toddler and started training her in the intricacies of music. Under his watchful guidance, she grew from prodigy to musician with sure-footedness. Her early performances were in tandem with her older brother, K N Shashikiran. As a pair of bright young children, this unique brother-sister duo won much appreciation from connoisseurs, critics and the music-loving public. Both of them branched out as soloists during their teens.
Kiranavali’s childhood and youth were replete with fun-filled music sessions and intensity of learning with her older brother, Chitravina Ravikiran. His positive and value-based approach to music and life have deeply influenced her.
In her early teens, Kiranavali had the opportunity of closely following and learning from T Brinda, a great repository of some of the best Carnatic treasures. For nearly a decade, Kiranavali assimilated a sizeable number of compositions of unparalleled quality in Brindamma’s repertoire. She immensely values the extraordinary privilege she had in accompanying her guru in several public and private performances as well as radio and television recordings. After Brindamma’s demise in 1996, Kiranavali learnt a few pieces from her equally renowned sister, T Mukta, and accompanied her in a hugely successful performance at the Cleveland Tyagaraja Aradhana (Mar 2002).
Around the age of seventeen, Kiranavali discovered her interest in and talent for Chitravina, an ancient South Indian slide instrument her family is famed for, and started pursuing it with great passion. Within a span of two years, she made rapid strides on the instrument that not only allowed her to team up with Ravikiran but also perform solo at many prestigious venues in India such as The Music Academy (Chennai), Krishna Gana Sabha (Chennai) and Sri Shanmukhananda Fine Arts (Mumbai).
The rich musical environment in which she grew up, the thorough training from her illustrious gurus, the many years of hard work and good work ethics, have sharpened Kiranavali’s innate talent and keen musical acumen. She is recognized and regarded as a musician with sound scholarship and a distinct voice. Some of her notable works include Lakshmi Prabhavam, a special dance production in which she was a lead singer, and her much acclaimed concert featuring a single piece in 101 and 108 ragas respectively. These performances not only received rave reviews and special mention at sell-out shows, but also established her credentials as a worthy torchbearer of her illustrious music lineage.
Kiranavali’s vocal career has taken her to many renowned centers across India, USA, Canada and Europe. They include the National Center for Performing Arts (Mumbai), India International Center (New Delhi), India Habitat Center (New Delhi), Narada Gana Sabha (Chennai), Sri Parthasarathy Swami Sabha (Chennai), Brahma Gana Sabha (Chennai), Karthik Fine Arts (Chennai), The Music Academy (Chennai), Jaya TV’s Margazhi Mahotsav, Shanmukhananda Fine Arts (Mumbai), South Indian Cultural Association (Hyderabad), Cleveland Tyagaraja Festival (Ohio), Bharati Kala Manram (Toronto), Ethnological Museum (Hamburg) and Reitberg Museum (Zurich). She has also been featured in prominent television networks such as Doordarshan, Jaya TV, Raj TV and SVBC, besides recording for various radio networks in India and the United States. Kiranavali has lent her voice for documentaries on various great masters including her guru, T Brinda and her legendary grandmother, Vina Dhanammal, and has cut her own CD albums as well.
accompaniment: