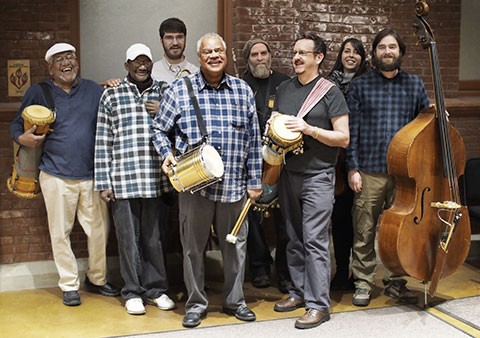 Composer, saxophonist, poet and
Guggenheim Fellow, Oliver Lake is one of jazz's most prolific and
eclectic artists of the last 40 years. Oliver Lake is known for
everything from his solo saxophone performances and recordings; to his
solo music-theater work; to his reggae-jazz group Jump Up; to his work
as a founding member of the World Saxophone Quartet; to his Oliver Lake
Big Band; to the Oliver Lake Steel. Lake was a founding member of the
Black Artists Group (BAG) in St Louis in the 1970's where he grew up
with trumpeter Lester Bowie and pianist John Hicks. He has received
multiple commissions from the National Endowment for the Arts, Meet the
Composer, and the Mary Flagler Cary Charitable Trust and his works have
been performed by the Arditti String Quartet, the World Saxophone
Quartet, the Amherst Sax Quartet, violinist Regina Carter, the Brooklyn
Philharmonic, the San Francisco Contemporary Players, New York New Music
Ensemble, and Pulse Percussion Ensemble of New York. He has worked with
a wide range of artists including the pop singer Björk, rocker Lou
Reed, jazz vocalist Abbey Lincoln, and rap group A Tribe Called Quest.
Other projects include a collaboration with writer and law professor
Patricia Williams, and the Quagmire Trio with komungo player Jin Hi Kim
and bassist William Parker. Also an exhibiting visual artist, Lake
continues to perform worldwide with his own ensembles as well as in Trio
3, the long-standing cooperative trio with percussionist Andrew Cyrille
and bassist Reggie Workman (sometimes augmented by pianist Geri Allen).
Lake spent time in Cuba this past year through the American Composers
Forum.

Ars Nova
Workshop welcomes the return of bandleader Kevin Diehl, who we
commissioned in 2009 to compose a piece commemorating Sun Ra which was
performed as part of the Institute for Contemporary Art's installation
“Pathways to Unknown Worlds: Sun Ra, El Saturn & Chicago's
Afro-Futurist Underground, 1954-1968.”