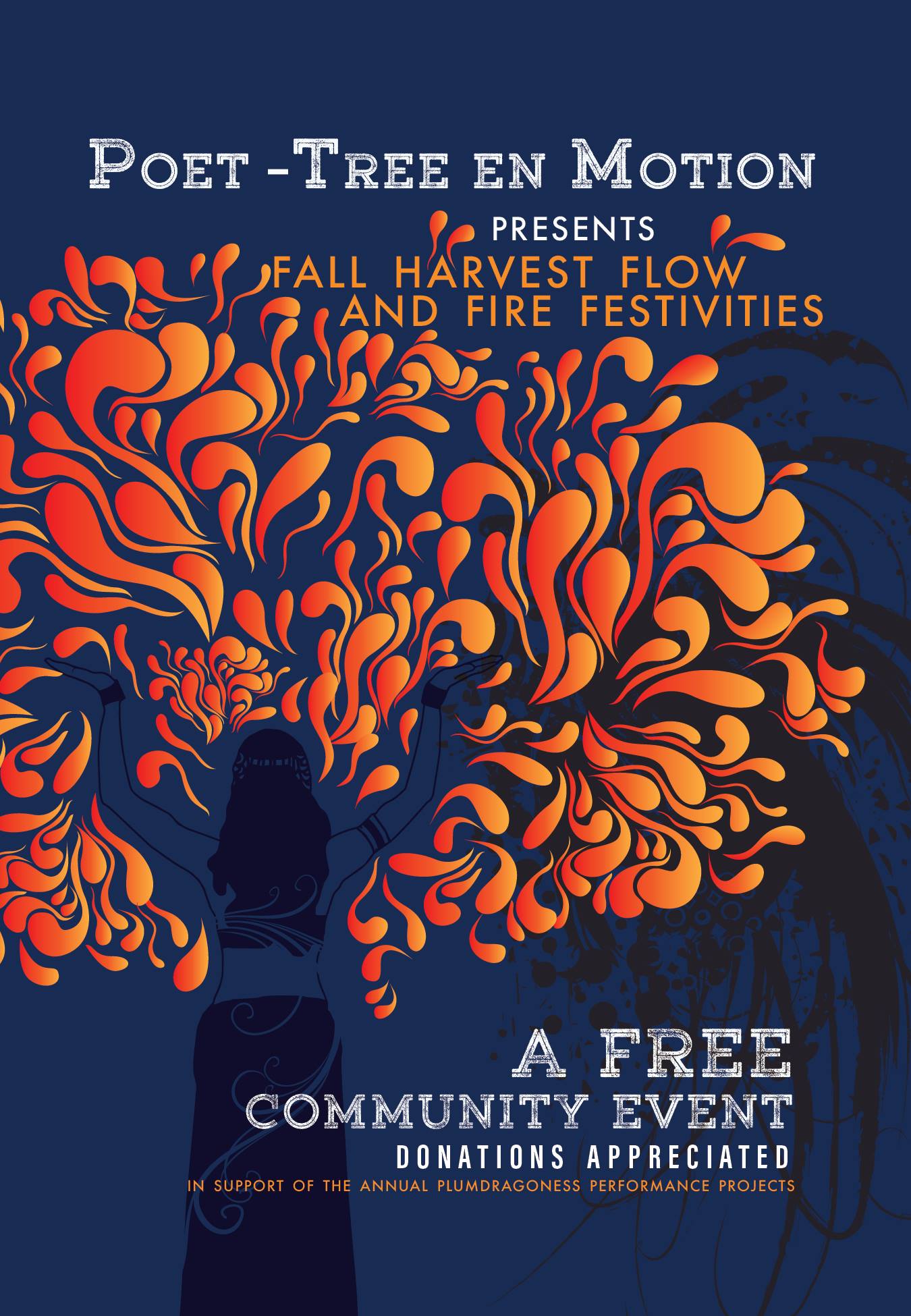 TO FEATURE FIRE AND FLOW ARTS

Flames will rage once again – the flames of creative inspiration and fire performance – as Poet-tree En Motion exhibits its 10th annual fall arts showcase to celebrate the harvest season Wednesday, Oct. 5 at The Rotunda in West Philadelphia.

Poet-tree En Motion has gained a reputation in the city for highlighting some of the best and brightest established and up-and-coming regional artists in a variety of disciplines while also giving the community a chance to shine on the open mike and open stage.

Multi-award-winning artistic director Gabrielle de Burke weaves together performances by artists of many different styles to create a magical display of the arts that ends up flowing seamlessly.

The “Fall Harvest Flow and Fire Festivities” event will kick off at 7 p.m. with spoken word and a yin-yang yoga flow and chi-kung workshop led by de Burke.  The practice will be accompanied by live electronic ambient soundscapes and visual projections by artist Bruce Leitch.

Every fall Poet-tree En Motion event features a fire and flow arts troupe performance. This year three members of the Burning Hearts Fire and Light Theater, a troupe that’s been making waves since 2010, most notably in the Lehigh Valley, Pa. and at regional “burner” events, will show off their skills. The trio – Sarah Fulton, bellydancer Lorenda and Ashley Riccaboni – will give two performances. Their first piece will feature flow artistry involving hooping, silk veils, swords, Isis wings and LED lights.  The last performance of the evening will be outside in front of the Rotunda with the trio dancing with a variety of exciting fire props.

In between Burning Hearts performances, legendary Philly DJ Jeff Omega will give a special tribal house set to get the audience grooving and moving.

“Community showcases like Poet-tree En Motion are fantastic platforms for burgeoning performers and creators and I'm excited to be invited to share my craft at this venue,” says Fulton, manager of the Burning Hearts. “It's a great way to meet other performers and support one another.”

The next Poet-tree En Motion event is scheduled for March, and it will feature female artists for its annual Women’s History Month celebration.

ABOUT POET-TREE EN MOTION: Poet-tree En Motion works to inspire both artist and audience to connect and work together toward cultivating the arts community in Philadelphia, welcoming artists of all kinds to experience performances local to the neighborhood, and offering the opportunity at each show for community participation to sign up in the all-genre open mike/stage and jam session component of the events.

Gabrielle de Burke of Dragon Spirit Arts (aka The Plum Dragoness)
The Poet-tree En Motion resident performance artist and event organizer is a West Philadelphia native known for her unique style of spoken word, dance choreography, fire and flow artistry, and skilled work as a martial artist and healing arts instructor. De Burke has performed throughout Philadelphia and abroad over the past 15 years as a solo artist, and a founding member, core performer and assistant artistic director of Archedream for HumanKind. She has released two albums of original work with the project Plum Dragoness and the Elements, known for its fusion of multimedia, world beat music, spoken-word vocals and lyrical poetry. She has also helped bring together the all-female performance group trio The Femme-Mynistiques. She has been teaching in and around the Philadelphia area and abroad since 2000.  DragonSpiritArts.com

Bellydance by Lorenda
Lorenda is a fusion-style belly dancer from Atlantic City who enchants audiences with fire, LED lights, swirling swords, ethereal wings and silk veils. Her repertoire includes a mix of American cabaret, Egyptian Oriental, tribal fusion and hip-hop. She has danced professionally for the past seven years as a solo artist, with the Burning Hearts Fire and Light Theater, the Daughters of Terpsichore, and internationally acclaimed Soraya’s Mid-East Dance and Music Productions. An eclectic performer, Lorenda is just as likely to bellydance to Arabic music as she is to trance or heavy metal. She is skilled in fire eating, head balancing with a candle tray and fire sword, and wields palm torches, fire fingers, fire fans and a fire belt. While acknowledging that bellydance is a form of entertainment, Lorenda always dances in the spirit of the many thousands of years of honoring and invoking the divine feminine. www.bellydancebylorenda.com

Ashley Riccaboni is a fire dancer who has performed with the Burning Hearts Fire and Light Theater since 2010. She served as choreographer for the Burning Hearts’ performance of “Follow the Flame,” their 11th annual show at Joseph S. Daddonna Lake and Terrace in Allentown, Pa. Ashley performs with fire and LED hoops, and a fire parasol. She is skilled in fire fleshing and fire eating. She teaches Hoops and Hops on Mondays at the Allentown Brew Works, does kids parties and events as Hoop Hoop Hooray, and teaches Hoop Sweat at Sweat Like A Girl gym.

For a list of The Burning Hearts' upcoming fire or LED performances, visit www.theburninghearts.com.

DJ Jeff Omega
House music producer, turntablist and DJ, Jeff Omega has earned a reputation as one of the hottest electronic music makers in the Philadelphia scene. He has stayed busy planning events and releasing original music on multiple labels over the past few years. He is one of the few truly adaptable performers, capable of reading the crowd and tailoring his sets to fit the mood. When booking Jeff, you can expect clean mixing and excellent track selection to get the floor packed and dancing. His sound is varied and adaptable, covering various house categories including deep, techy, bassline and jackin’, while occasionally dipping into other genres like drum 'n' bass, twerk, hip-hop, and funk. Jeff says: “I play all types of house music, just depends on whose house I'm in."


Bruce Leitch
Hopalong Horus Heisenberg is Bruce Leitch. He's been experimenting with electronic music since 2010. Before that he played bass and guitar in various bands. Most of his music is recorded with virtual instruments with iPad apps and occasional live guitar and bass. His music ranges from ambient and spacey to droning noise, and sometimes psychedelic or noise guitars.

Director of The Rotunda

Ashley Riccaboni spins fire hoops with the Burning Hearts Fire and Light Theater. She will be a featured fire and flow arts performer in the Poet-tree En Motion arts showcase Wednesday, Oct. 5 at The Rotunda in West Philadelphia.

Lorenda is a bellydancer who will perform with fire, swirling swords, LED wings and silk veils during the Poet-tree En Motion arts showcase Wednesday, Oct. 5 at The Rotunda in West Philadelphia.

Bruce Leitch (aka Hopalong Horus Heisenberg) is an electronic music producer who will play his surreal ambient soundscapes live and create visual projections while Gabrielle de Burke leads a yoga and chi-kung workshop during the Wednesday, Oct. 5 arts showcase at The Rotunda in West Philly.

Gabrielle de Burke (aka Plum Dragoness) will give a spoken-word performance and lead a yin-yang yoga flow and chi-gung workshop set to live music during her seasonal artists showcase Poet-tree En Motion on Wednesday, Oct. 5 at The Rotunda in West Philly.

Sarah Fulton, manager of the Burning Hearts Fire and Light Theater, will share her fire and flow arts talents at the Wednesday, Oct. 5 edition of Poet-tree En Motion at The Rotunda in West Philly.