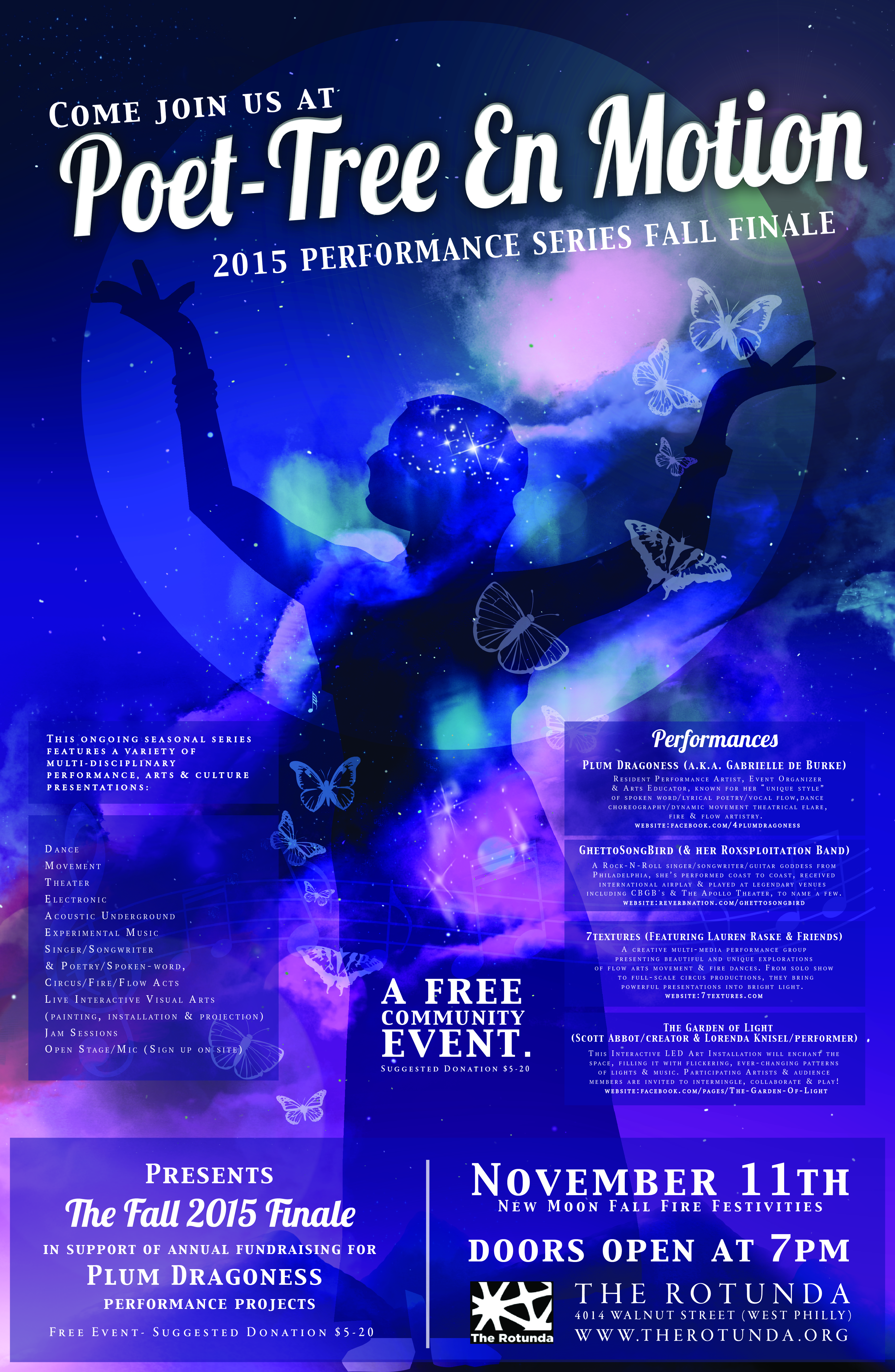 This last event of the season also offers an opportunity to celebrate the 9 years of Gabrielle de Burke’s (a.k.a. Plum Dragoness) ongoing performing arts residency @ The Rotunda & to support the annual Fundraising efforts of Plum Dragoness Performance Projects! A suggested donation of $5-20 is greatly appreciated at the door & there will be a Silent Auction featuring donations ranging from Antiques & Art, Farm to Table Restaurants, Artisan & Organic Body Jewelry, various Crafters to Goods & Services (Massage/Bodywork/Acupuncture) & etc. Think of this as an opportunity to support local community artists & an opportunity to procure some unique gifting possibilities for friends & family… THANKS FOR YOUR CONSIDERATION & SUPPORT!}

Native to West Philadelphia, Plum is a multi-talented thespian, dancer, martial artist, instructor, poetess and writer who has been involved with performing arts since childhood. She is known for her poetic style, vocal performance, fire dance, flow arts and choreographic flair throughout Philadelphia and abroad. Over the past 15 years, she as toured not only as a solo artist but also as founding member/core performer/assistant artistic director with groups like Archedream for HumanKind, Be-Tru Dance Crew among many others. She has also independently released 2 albums of original work with the project Plum Dragoness & the Elements, known for its fusion of multi-media, live world beat musical infusions & spoken word vocals & lyrical poetry. For the past few years her focus has been with the all female performance group trio she helped bring together known as The Femme-Mynistiques, who are soon to release their debut EP “Here She Comes…” Since 2007, Plum has been a resident performance artist, as well as host and organizer for the successful performing arts series known as Poet-tree En Motion at The Rotunda! This has allowed her the opportunity to share her own creative performances (including collaborative projects she initiated) and work created by a plethora of other unique artists with the west Philadelphia community and beyond!

Rock-N-Roll singer/songwriter/guitar goddess from Philadelphia who landed in L.A. in 2002 to record her 1st CD with the help of her mentor Rosa Lee Brooks who wrote & recorded with the Legendary Jimi Hendrix. She took Ghettosongbird under her wings with jam session with musicians who played with Jimi Hendrix, Fishbone, Chaka Khan, Tupac, New Birth, & so many more. She performed in Philly, New York, Delaware, Jersey,D.C., South Carolina, Ohio, with airplay in London, Philly, & New York City, opening up for Veron Reid's new band(Living Colour guitarist), Sonja Sanchez, doing shows with Res & even Santi White of Santigold, playing at Legendary venues including CBGB's, B.E.T.'s 106&Park, The Apollo Theater, to name a few.

The Garden of Light

Light is another beautiful dimension which we feature, as entertainment, media production, and, as always, as art. From solo shows to full-scale circus productions, we love to bring a powerfully bright show to your events. Working everything from weddings & galas to festivals & artist showcases to corporate events & commercial media, we perform with a variety of tools and acts tailored especially for you. Our shows include performers, insurance, trained fire safety, and fire permits for public events.

Admission is FREE! Donations are encouraged and appreciated!