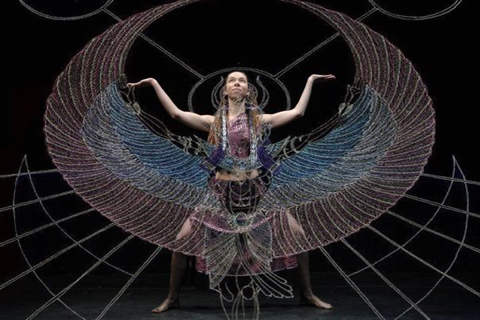 POSTPONED UNTIL APRIL 29!
IN TAKING STEPS TO SLOW THE SPREAD OF
COVID-19, THE ROTUNDA HAS BEEN ORDERED TO SHUT DOWN NOW. WE HOPE TO
REOPEN ON APRIL 18 BUT WE'LL REASSESS
AT THE END OF MARCH TO DETERMINE IF THIS
CLOSURE SHOULD BE EXTENDED. ALL EVENTS BETWEEN MARCH 13 AND APRIL 17 ARE
CANCELLED OR POSTPONED.
Poet~tree En Motion
presents
The 2020 Spring Her-Story Event: In Celebration of Women Artists!
A FREE community event (Donations Suggested/Appreciated)
This ongoing seasonal series features a variety of multi-disciplinary performance, arts & culture presentations...

- The Goddess Crew w/ Styx Latte: A Philly based community drumming troupe sprung out of parades and performances at a
variety of “burner” festivities.

ARTIST BIOS:
Line On Some Trip (L.O.S.T.): A French/ Middle-Eastern hippie punk singer-songwriter and guitarist formerly based in Brooklyn, NY and freshly relocated to West Philly. Born and raised in the suburbs of Paris, in a Muslim immigrant family from Syria and Palestine, Line traveled across Europe and lived in England, Italy, Scotland and Hungary where she found many human and artistic inspirations before moving to the US in 2014. With a soft voice that can turn into a storm of rage and strumming strings, Line tackles the topic of depression caused by the consumption society. She composes Post-punk and Antifolk sometimes psychedelic songs with simple and quirky lyrics full of irony. “Music is a tool that helps me tame my anger and achieve self and death
acceptance.”

Debora Dias: A Portuguese born, Philadelphia based artist, whose body of work focuses on the portrayal of figures, with themes and symbolism that speak directly to the phenomena of expressing the divine feminine on a nurturing and sensual level. Furthermore, her colorful and detailed abstract paintings tend create an impact on the viewer’s sense of liberation, and elicit an emotional response.

Paulette Branson and Mixed People: A funky, soul fusion band with hints of rock and world music...or as we like to call it - new age funk. Versatile musicianship, raw lyrics, and full vocal harmonies create a genuine, mixed musical experience. The name Mixed People derived from colors that bloomed out the whole funk and nothing but the funk. It embraces the love of self and others regardless of our differences and celebrates the beauty in us all. Mixed People is a Philadelphia-based band, founded by guitarist, Paulette Branson, in 2012. The music is progressive, and the energy and emotion behind this band will get you dancing on your feet and singing along.

The Goddess Crew: A drumming troupe sprung out of parades and performances at a variety of burn events, including PEX and Firebird. Having realized their own prowess and excitement for rhythm, these talented ladies invited Styx Latté to lead rhythms and bring structure to the music. Largely improvisational and free form, the momentum will sweep you up on your feet and shake your soul! You'll never notice the telepathic timecode keeping it together... but if there's rhythm in you, The Goddess Crew will coax it out. Come JOIN US! BYOD.

Plum Dragoness: Native to West Philadelphia, Plum Dragomess (a.k.a. Gabrielle de Burke) is a multi-talented thespian, dancer, martial artist, instructor, poetess and writer who has been involved with performing arts since childhood. She is known for her poetic style, vocal performance, fire dance, flow arts and choreographic flair throughout Philadelphia and abroad. Over the past 15 years, she has toured not only as a solo artist, founding member/core performer/assistant artistic director of Archedream for HumanKind among many others. She has also independently released 2 albums of original work with the project Plum Dragoness & the Elements, known for its fusion of multi-media, live world beat musical infusions, spoken word vocals & lyrical poetry. She has also helped bring together the all female performance group trio known as The Femme-Mynistiques, who will officially release their debut EP “Here She Comes…” in the summer of 2016. Since 2007, Plum has been a resident performance artist, as well as host and organizer for the successful performing arts series known as Poet-tree En Motion at The Rotunda! This has allowed her the opportunity to
share her own creative performances (including collaborative projects she initiated) and work created by a plethora of other unique artists with the west Philadelphia community and beyond! Gabrielle’s work as a healing arts practitioner and instructor continues to intersect with her work as an inter-disciplinary performance artist through the incorporation of Internal and Martial Arts forms in combination with Dance, Poetry and Theater presentation. Gabrielle has been teaching in, around the Philadelphia area & abroad since 2000. If you dig It… then follow: ThePlumDragoness.com + facebook.com/4plumdragoness & Listen: soundcloud.com/plum-dragoness + tunecore.com/music/plumdragoness + cdbaby.com/Artist/PlumDragonessandtheElements!

IN TAKING STEPS TO SLOW THE SPREAD OF
COVID-19, THE ROTUNDA HAS BEEN ORDERED TO SHUT DOWN NOW. WE HOPE TO
REOPEN ON APRIL 18 BUT WE'LL REASSESS

AT THE END OF MARCH TO DETERMINE IF THIS
CLOSURE SHOULD BE EXTENDED. ALL EVENTS BETWEEN MARCH 13 AND APRIL 17 ARE
CANCELLED OR POSTPONED.