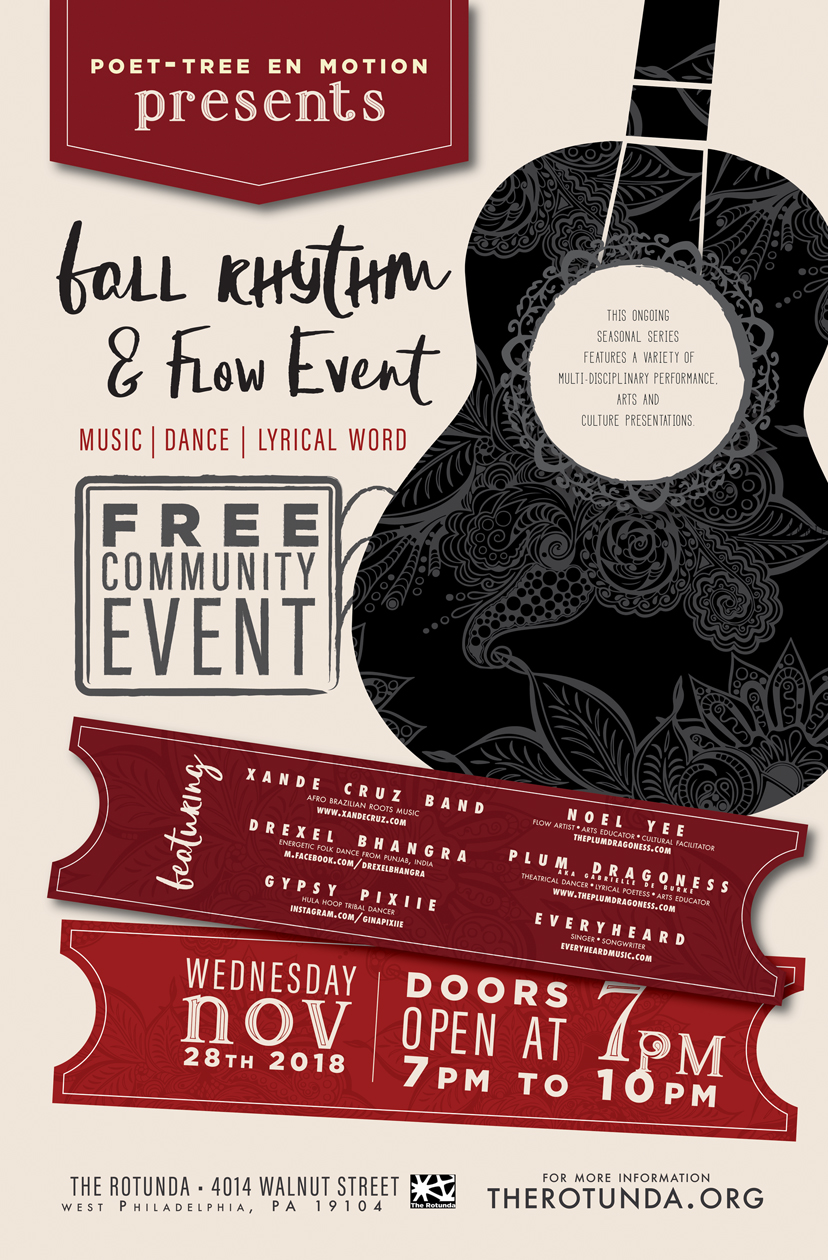 PHILADELPHIA – The Poet-tree En Motion free seasonal showcase has earned the reputation of being one of the most eclectic performing arts events in Philly! The next showcase on Nov. 28 at The Rotunda in University City will provide a variety show with an emphasis this time on live music and the flow arts.

For more than a decade Poet-tree En Motion has highlighted diversity not only in the featured artists’ backgrounds and media, but also in experience.  Some of the region’s hottest up-and-comers share the stage with seasoned professionals. And they all come together for a celebration of the arts headed by the one and only multi-award-winning performance artist Gabrielle de Burke.

There is always an open mic and open stage portion to the Poet-tree En Motion events. Everyone is welcome to sign up and perform, and all types of arts and media are welcome.

“I’m trying to do something different that’s not just an open-mic night,” de Burke says. “I like when there’s a range of performances at the events.

“The whole thing is a ritual: the coming together of the performers and the audience. I am down with everyone coming together and participating the way they feel. Throughout all of the events, there is an engagement in the community.”

De Burke is also a featured performer, who goes by the stage name Plum Dragoness, and weaves together healing arts disciplines, dance, martial arts, movement meditation and spoken word into her unique style of “flow-etry.”

De Burke says that all of the artists are expressing “poetry in motion” in different ways.

“Poetry in motion is a lot of different things,” de Burke says. “It’s not just stuck on a page. It’s not just stuck on a stage. It’s moving in time. All of the artists are expressing poetry but just in different forms. I want the event to be an expression of the many different ways in which poetry is present in our lives whether it’s music, dance, art or visual performance.”
Drexel University Bhangra (DUB) will give a performance of the folk dance of Punjab, India.  This is a quite fitting dance for Poet-tree En Motion because “the dance is traditionally about happiness and peace and the performance about unity of peoples,” the group explains.

Poet-tree En Motion’s resident sound engineer, Styx Latte, will be playing the drum set for Xande Cruz’s Afro-Brazilian music performance. Cruz will sing his compositions in both English and Portuguese, and play percussion. Nick Cejas, founding member of the band FAWZ, will play bass. Ben Arsenal, the producer of Worldtown Soundsystem and co-founder of Elevate Sound recording studio, will contribute with live sampling and sequencing.

Also performing music will be Everyheard – or just “Ev” – a passionate singer-songwriter and guitarist who isn’t afraid to get vulnerable in her music and on stage.

Noel Yee, skilled in juggling and object manipulation, is one of the most prominent figures in the contemporary world of flow arts. He brings to our stage a wealth of experience from his 11 years of performing and teaching to thousands of students. He is part owner and founder of the Flow Arts Institute in addition to numerous large-scale flow arts festivals.

Gypsy Pixiie, a self-proclaimed “dance healer,” will bring her unique style of hoola hooping and dance blending the genres of tribal fusion, hip-hop, liquid, popping, and locking. She uses dance as a type of “medicine” to help heal herself and the world.

The Poet-tree En Motion Fall Rhythm and Flow Event is scheduled for 7-10 p.m. Wednesday, Nov. 28. The event is free and will be held at The Rotunda, located at 4014 Walnut St. in University City, West Philadelphia. Doors open at 7 p.m. and performances begin shortly after. Suggested donation is $5-$20. Sign up at 7 p.m. for a spot on the open mic.

The next Poet-tree En Motion will be on March 21 for the annual Women’s History Month event. It will be a live music, movement and dance celebration in honor of “her-story.” The following showcase is usually around the summer solstice.


ABOUT POET-TREE EN MOTION:
Poet-tree En Motion works to inspire both artist and audience to connect and work together toward cultivating the arts community in Philadelphia, welcoming artists of all kinds to experience performances local to the neighborhood, and offering the opportunity at each show for community participation to sign up in the all-genre open mike/stage and jam session component of the events.

•    Xande Cruz
Growing up in Sao Paulo, Xande has been profoundly influenced from the contrast of the urban and traditional, social injustice, and diversity found in South America's largest city. His early inspiration was from listening to the sounds of Popular Brazilian Music (MPB) and later hip-hop and electronica in the late ’80s when he relocated to New York. It was in New York that Xande commenced his project, the Batukis, as an Afro-Brazilian percussive-based group, bringing the rhythms of Brazil to the United States. Xande has performed as a percussionist with samba schools, touring Japan and South Korea, as well as with Brazilian pop bands, African drum ensembles, dance troupes and theatrical productions.
https://www.facebook.com/Xande-Cruz-Music-211617173360/

•    Drexel University Bhangra
With talent, pride and honor, Drexel University Bhangra (DUB) showcases the ethnic folk dance of Punjab, India. The dance is traditionally about happiness and peace and the performance about unity of peoples. To those who experience the phenomenon of the dance on stage or in their seats, it is rich in dignity and culture.

The dance team is a non-profit organization run by hardworking, conscientious Drexel University undergraduate students. Since its foundation in 2005, DUB has been successfully offering its members a valuable life experience ranging from the development of active personalities and application of leadership skills to learning the actual dance. Performances are remarkable, and the joy we see in the eyes of the older Punjabi generations is inexplicable: they are proud that we are using our passion to establish our identities and share our culture.

DUB enthusiastically participates in charity shows, multicultural shows, campus events, and can even be scheduled for special occasions such as weddings, birthdays, and anniversaries. Every year we also compete nationally in four to five competitions to spread our name. By thus making ourselves known within the vicinity and even worldwide, we hope to enthrall our audiences and spark their curiosities.
www.facebook.com/DrexelBhangra

•    Styx Latté
Since 1995, Styx Latté has been haunting West Philly and beyond with his drum set and djembe playing.  Ranging from rock to blues, jazz to swing, Afrobeat and even samba, and having studied at Drexel, Styx brings a sense of rhythm and timekeeping that will make you get up on your feet and dance!  When he's not playing, he can often be found behind the soundboard mixing and recording live bands, including at West Philly's favorite original live music venue, The Rotunda!

•    Ben Arsenal
Ben Arsenal is the producer of Worldtown Soundsystem, co-founder of Elevate Sound recording studio and education group, and adjunct professor at Rowan University.  Between DJing, producing and studying drums and percussion over the last two decades, he has developed an all-around approach to musical creation.
Instagram: @benarsenal

•    Nick Cejas
Nick Cejas was born and raised in Philadelphia. At 19 he moved to New York City to pursue a passion for music, playing for countless artists you've never heard of and a few you have. Decades later he returned to Philly with a new drive and a new project as a founding member of the band FAWZ. Nick believes Frank Zappa said it all when he said, "Music is the best."

•    Noel Yee
One of the most important figures of the modern flow arts scene, Noel Yee has had a strong hand in the evolution of flow arts culture and brings a unique understanding of object manipulation to the table. With thousands of students over his 11 years of training, you can’t go wrong with a class from Noel. In addition to his performing career and quality instruction, Noel is part owner and founder of many notable events, performance troops and flow arts companies including Flow Arts Institute, FireDrums, Kinetic Fire, Vulcan Crew, Foreways Project, Vulcan DVDs, and Give Props Documentary. He is the director of the Flow Show Project and is a board member of the International Juggling Association. If it’s insight into the flow arts mindset and culture you seek, or just want to grow your skills and techniques, take a lesson from a seasoned pro.
www.noelyee.com

•    Gypsy Pixiie
Gypsy Pixiie is a self-taught dancer who combines tribal fusion, hip-hop, liquid, pop, locking and flow arts into her own dance style. “Dance is one of my biggest passions in this life and it is truly my medicine and how I heal myself and the world. At times I call myself a dance healer, using dance as a catalyst for abundant growth. It is truly a movement meditation and helps us release dormant energy that gets stuck in the body. So I put into practice all types of dance and hope to learn even more on this movement medicine journey and path.”
www.instagram.com/ginapixiie

•    Plum Dragoness (a.k.a. Gabrielle de Burke)
Native to West Philadelphia, Plum Dragoness is a multi-talented thespian, dancer, martial artist, instructor, poet and writer who has been performing since childhood. She is known for her poetic style, vocal performance, fire dance, flow arts, and choreographic flair throughout Philadelphia and abroad.

Over the past 15 years, she has toured as a solo artist, founding member/core performer/assistant artistic director of Archedream for HumanKind among many others. She has independently released two albums of original work with the project Plum Dragoness & the Elements, known for its fusion of multimedia, live world-beat musical infusions, spoken-word vocals and lyrical poetry. She has also helped bring together the all-female performance group trio The Femme-Mynistiques who released their debut EP “Here She Comes…” in the summer of 2016.

Since 2007, Plum Dragoness has been a resident performance artist, host and organizer for the successful performing arts series Poet-tree En Motion. This has allowed her the opportunity to share her own creative performances (including collaborative projects she initiated) and work created by many unique artists within the West Philadelphia community and beyond.

Her work as a healing arts practitioner and instructor continues to intersect with her work as an interdisciplinary performance artist through the incorporation of internal and martial arts forms in combination with dance, poetry and theater presentation. She has been teaching in the Philadelphia area and abroad since 2000.
ThePlumDragoness.com