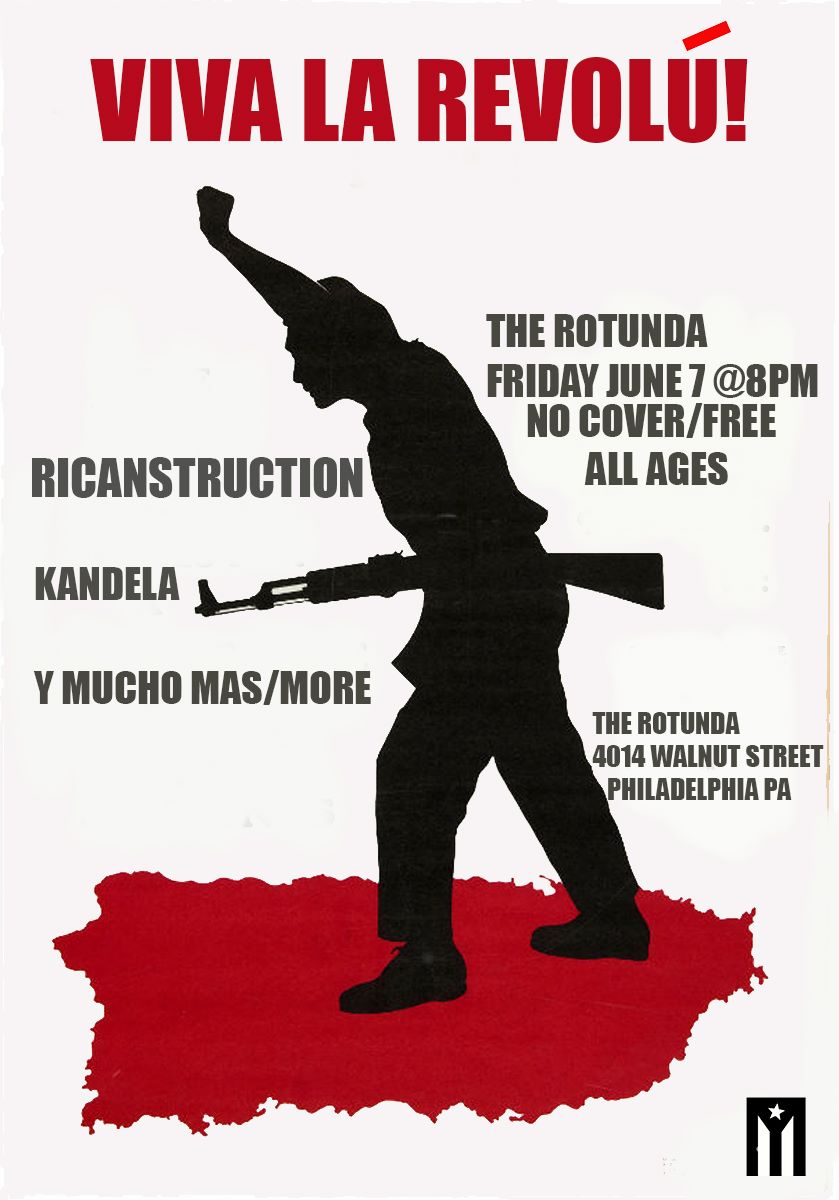 The underground anti-corporate "Puerto Punk"icons known as RICANSTRUCTION will be reuniting for the first time in thirteen years for a special Rican Rebel Resistance performance/concert on Friday, June 7th at 7PM at one of their old stomping grounds, The Rotunda in Philadelphia, PA!!!

RICANSTRUCTION will be joined by Philadelphia's own Rican rock rebels, kandela!!!!

RICANSTRUCTION was formed in 1996 by the vocal vandal known as Not4Prophet (aka Zero Prophet of Abrazos Army and X-Vandals), riddim section subversives, Arturo and Joseph "sickFoot" Rodriguez and guitarist Eddie "Alsiva" Alsina.

The Rodriguez brothers and Alsina were Boricua bombers from Harlem, NY who had held the beat down for everyone from post Cro-Mag punk project Both Worlds, to Blues legend Johnny Copeland. While Not4Prophet, was a housing project poet and graffiti writer known mostly for writing on "private" property" and shouting in the street.

RICANSTRUCTION started out playing in the squats and alternative punk spaces of the Lower East Side in NYC, and could be seen and heard at nearly every political protest, rally or demonstration you could possibly get arrested at. Along the way they were banned from several NYC clubs, until they found a home at the (in)famous CBGB.

When Eddie Alsina left the band in 1997, they recruited, guitarist, Fidel Paulino, a santero speed-metal shredder who rican-pleted the RICANSTRUCTION rebellion and was featured on their debut full length release, Liberation Day in 1998. With Fidel, they organized several DIY (do it yourself) tours throughout the U.S and Latin America.

RICANSTRUCTION's last guitarist was Steven "Albizoo" Maldonado, who toured the US with the band before they dis-banded in 2006.

Other members of RICANSTRUCTION through the years included Taina Asili, (of Anti-Product and La Banda Rebelde) and Roger Vasques (of Ill Nino).

RICANSTRUCTION's final performance was on September 23, 2006 at a United Nations rally in NYC, on the one year anniversary of the FBI assassination of Ejercito Popular Boricua - Machetero leader, Filiberto Ojeda Rios.