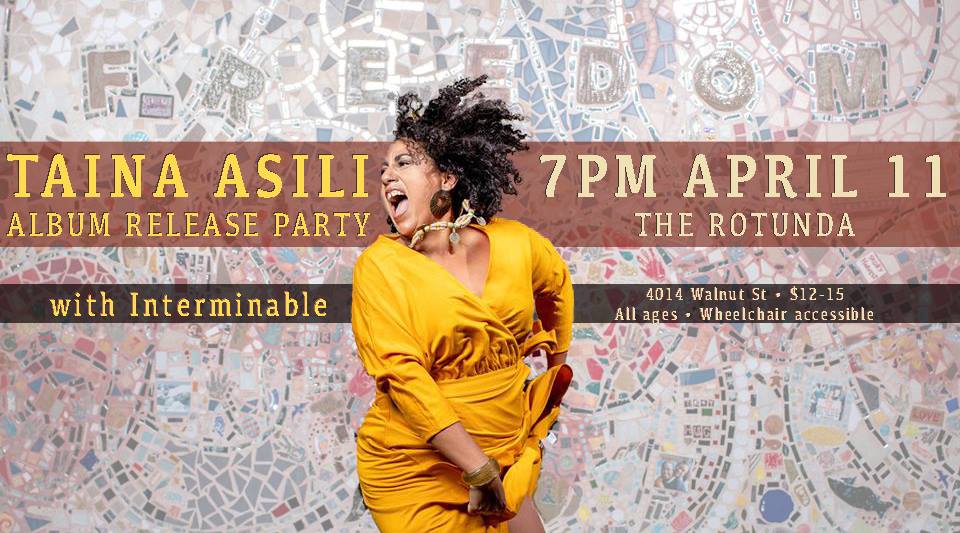 Taína Asili album release party w/Interminable
Come join us in celebrating the release of Taína Asili's new album Resiliencia on April 17th at The Rotunda! Joining the night will be Interminable! More guests and fun to be announced...

Taina Asili is a Puerto Rican singer, bandleader and activist carrying on the tradition of her ancestors, fusing past and present struggles into one soulful and defiant voice. Residing in New York, Taina performs Afro-Latin, reggae and rock infused social justice songs with her eight-piece band. In January 2017, Taina performed for at The Women’s March on Washington. Her most music video “No Es Mi Presidente” premiered in Rolling Stone and received national acclaim. The Huffington Post named her in a list of in a list of “12 Freedom Fighting Bands To Get You Through the Trump Years”, and Billboard Magazine featured her in a list of “11 Songs of Protest & Resistance by Latino Artists.” Over her 20-year career, Taina has performed around the globe, sharing the stage with renowned artists and activists such as Alicia Keys, Janelle Monae, Madonna, Talib Kweli, Angela Davis, Cornel West, Tom Morello, Jello Biafra and The Sierra Leone Refugee All-Stars. http://tainaasili.com

Pre-orders of the Resiliencia album can be purchased at https://tainaasili.bandcamp.com/album/resiliencia
Watch Taina Asili's new music video documentary Plant the Seed with music from the new album here: https://www.youtube.com/watch?v=kPaoepZj-yI

Interminable is a Philly-based Latin alternative fusion project rooted in diasporic connection. Using improvisation and original compositions in Spanish, funky bass lines and driving rock beats, they create spaces of musical conversation to shed light on the links that exist between our cultures. Combining the traditions of son jarocho (from Mexico), jazz, rock, funk, classical and electronic musics, they bring together the Mexican jarana with the trumpet, the trombone with the drumset, to meet at the crossroads and create a futuristic, improvisatory vision free of the constraints of genre. https://interminablemusic.com