The Secret Cinema pres. Four Films - The Enchanted Hill: The Story of San Simeon, A Ballad of Love, Directors at Work, and Geisha Girl 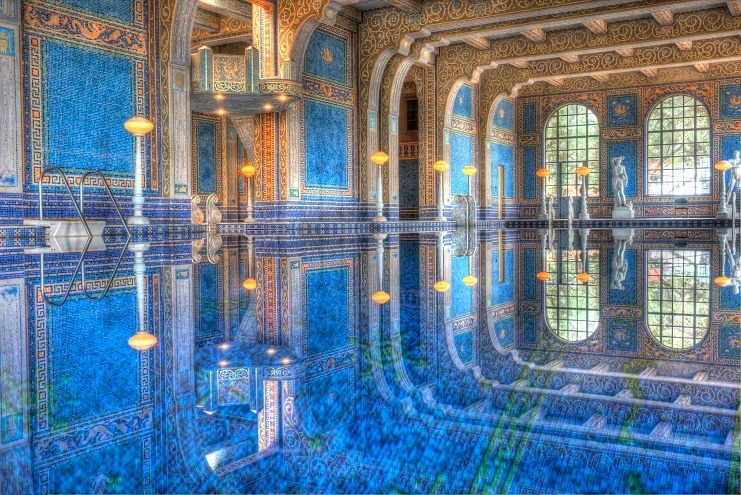 The Secret Cinema will begin a new year and a new season at The Rotunda, with a brand new program called FOUR FILMS. The program, to be presented on Thursday, January 9, consists of four short films, which together make up a feature length program.

However, the four films of FOUR FILMS have nothing to do with each other. What they have in common is that we have never shown them before, are unlikely to have been seen by most people, and they are all very interesting. Each one is quite good.

There will be one complete show at 8:00 pm. Admission is FREE.

All Secret Cinema presentations are projected in 16mm film on a giant screen (not video).

This screening is part of The Rotunda's ongoing "Bright Bulb Screening Series," which offers free movies on the second Thursday of every month, throughout the year.

The four films of FOUR FILMS are:

THE ENCHANTED HILL: THE STORY OF SAN SIMEON (1963) - An excellent documentary about William Randolph Hearst's lavish mansion, which was the inspiration for CITIZEN KANE's Xanadu. It was originally produced for San Francisco's KPIX-TV, by Lee Mendelson -- who would later achieve fame for his animated PEANUTS specials (and who died on Christmas Day, 2019). THE ENCHANTED HILL makes good use of Hearst home movies showing the construction of the estate, which today operates as a popular museum.

A BALLAD OF LOVE (1965, Dir: Mikhail Bogin) - A touching, sweet depiction of the tentative romance between a young musician and a deaf woman who works in a pantomime theater troupe. Filmed at Riga Studios in Latvia.

DIRECTORS AT WORK: THE DIRECTOR AND THE IMAGE (1982, Dir: Carl Workman) - Produced by David Shepard for the Directors Guild of America, this project took great advantage of access to the great film directors of the day and of the past. Discussing their careers are Rouben Mamoulian, Alfred Hitchcock, Alan Jay Pakula, Vincente Minnelli, King Vidor and more, and generous clips from their work are shown.

GEISHA GIRL (1934?) - This film is a bit of a mystery, and we can find almost no information about it, online or elsewhere. Was it a sound re-release of a film shot silent? A condensed version of a longer film (its producer, Elmer Clifton, was reported in a 1932 trade publication to have contracted with a Japanese filmmaker to shoot scenes for a FEATURE called THE LIFE OF A GEISHA GIRL)? We may never learn, but this reel nonetheless presents a fascinating depiction of the geisha tradition.

There will be one complete show at 8:00 pm. Admission is FREE.