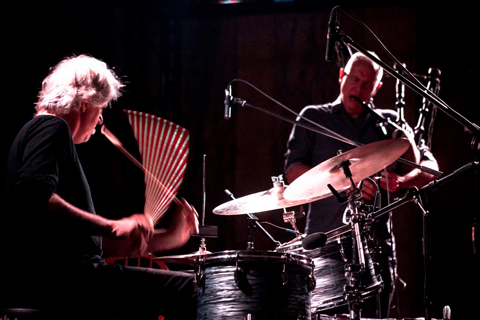 Tony Buck (of The Necks) & David Watson
Tony Buck is regarded as one of Australia’s most creative and adventurous exports, with vast experience across the globe. As a drummer, percussionist, improviser, guitarist, video maker and producer, he has been involved in a highly diverse array of projects but is probably best known around the world as a member of the trio “The Necks”. Apart from The Necks he has played, toured or recorded with Jon Rose, Otomo Yoshihide, John Zorn, T. Cora, Phil Minton, Haino, Even Parker, The Machine for Making Sense, Lee Ranaldo, Ne Zhdall, The EX, Clifford Jordan, Ground Zero, and more. Following studies and early experience in Australia he spent time in Japan, where he formed “Peril” with Otomo Yoshihide and Kato Hideki before relocating to Europe in the mid-nineties. Some of the more high profile projects he has been involved with include the band Kletka Red, and touring and recording with, among others, The EX, The Exiles, and Corchestra, and involvement with most of the international improvisation and new music community and festivals. He also creates video works for use with live music performance and has had pieces shown in Tokyo, Belfast, Berlin, New York and Sydney. Current projects include a LIVE solo adaption of the UNEARTH music, incorporating installations, video, drums and guitar; “Spill” with Magda Mayas; “Transmit” (a guitar driven post-rock project); New York based trio “Glacial” (with David Watson and Lee Ranaldo); “Circadia” (with Kim Myhr, David Stackenas and Joe Williamson); a long standing duo with Axel Doerner as well as a continuing in ad hoc and improvised performance settings.

David Watson is an experimental musician — a guitarist, bagpiper and all around advocate for intelligent listening. His work encompasses improvisation and composition in a wide variety of contexts. Originally from New Zealand, where he co-founded the experimental label Braille Records and organized several national music festivals he moved to New York in 1987. As a guitar player he became an dedicated participant in the downtown scene, notably for John Zorn’s Cobra, with Ikue Mori, Christian Marclay, Zeena Parkins, Fred Lonberg-Holm, and the improvising trio Tipple. In the early 90’s he started playing the Highland bagpipes and has had a longtime project with Lee Ranaldo and Tony Buck, Glacial. He has created a new vocabulary for the instrument, pushing the limits of space, sound and timbre. The Wire described his pipe compositions on Fingering an Idea, the project he made for Phill Niblock’s XI label as, “shimmering lines, piling-up like an old Terry Riley piece.” Similarly, Che Chen writing for Other Music, described “long form tonal explorations that can be so otherworldly and engrossing that the slight wheeze of the windbag that comes at the end of each piece can be a startling and oddly necessary reminder, that these sounds were created by human breath.” Inspired by processions, Watson has an ongoing project creating new-music for walking. This has led him to making theater pieces for the Stedelijk Museum in Amsterdam, a composition for pipe bands in Tasmania, and for a large ensemble in a storage facility in Los Angeles. Phill Niblock’s piece “Bag” was made using Watson’s playing as source material, and they have performed it many times internationally.

Admission is FREE but donation for the artists would be greatly appreciated.