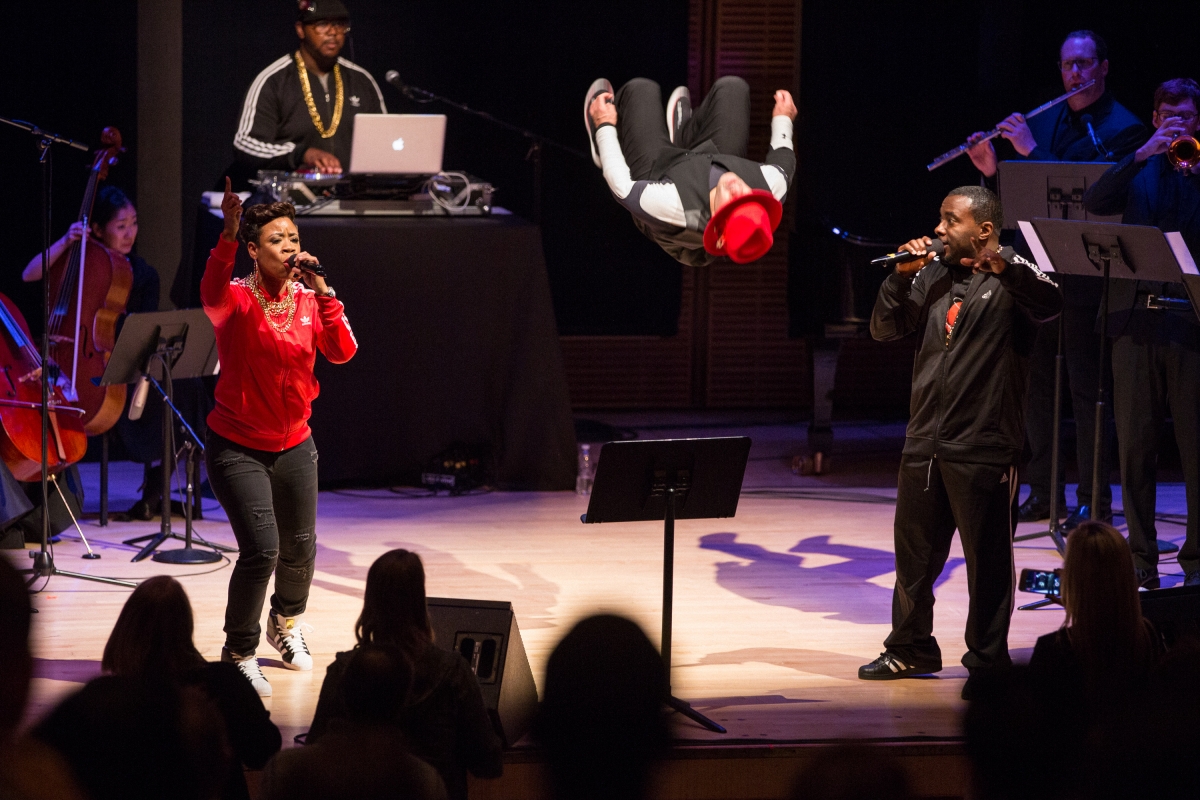 MOVED INDOORS TO THE ROTUNDA! Standing room only!

Thee Phantom & the Illharmonic Orchestra blend hip-hop, dance, and live orchestration to create a unique experience. They’ve performed at the Kimmel Center, Carnegie Hall, the Kennedy Center, and even at President Obama’s final holiday party. Thee Phantom, born Jeffrey McNeill, wrote his first rhyme at the age of 8 and made his first beat by mixing the instrumentals from the Beastie Boys’ Paul Revere with Beethoven’s Fifth Symphony at age 12. In 2002, Phantom became the first Hip-Hop artist to perform at Philadelphia’s prestigious Kimmel Center with musical accompaniment from members of the world-renowned Philadelphia Orchestra and the Chamber Orchestra of Philadelphia. Phantom has since formed his own ensemble, dubbed The Illharmonic Orchestra, and has toured the United States and Japan. The group has also released two albums: Hero Complex in 2006 andMaking Of An Underdog in 2009. Phantom’s third album Maniac Maestro is slated for release in 2018. Click here to RSVP!  Hear Thee Phantom & the Illharmonic Orchestra on Soundcloud.

Opening the show will be Tyva Kyzy  (“Daughters of Tuva”), the first and only women’s group in Tuva that performs all styles of Tuvan throat-singing. This form of multiple tones harmonic singing has been practiced mostly by men and prohibited for women. Tyva Kyzy dares to perform publicly this ancient art of singing in their own unique “feminine” style. Hear Tyva Kyzy on Youtube.

At the June Summer Series staff from the University City Arts League will be making Hip Hop themed bling! Come make your own boombox pendant, or get creative with the help of our artists.

About the 40th Street Summer Series
The 2018 40th Street Summer Series—co-produced by University City District, Penn, and The Rotunda—will take place this year on Saturdays May 19, June 23, July 14, August 18 and September 15 at the green space behind the Walnut Street Library at 40th and Walnut. Activities, free giveaways, and performances begin at 6 pm. If it's raining, the Summer Series will move indoors to the back room at The Rotunda at 4014 Walnut Street.

The Summer Series has grown into one of the most popular outdoor summer events in University City. This free outdoor series features internationally-recognized talent in one of “West Philly’s picturesque open green spaces” (Philadelphia Weekly). In the past, the Summer Series has featured internationally-acclaimed acts such as the Millennial Territory Orchestra, Man Man, and the Sun Ra Arkestra, playing free outdoor concerts that capture the soul of the neighborhood.

MOVED INDOORS TO THE ROTUNDA! Standing room only!