Built in 1911 as a house of worship originally for the First Church of Christ Scientist, it was designed by Carrere and Hastings, the New York-based firm who set the tone of the American classicism of the twentieth century. With its low, tile-roofed narthex, circular main hall (AKA the sanctuary), and oversized windows, The building is of unsurpassed simplicity and elegance recalling Early Christian spaces such as Rome’s Santa Sabina. The University of Pennsylvania purchased the building in 1996 as a strategic acquisition tied to a large scale community investment strategy known as the West Philadelphia Initiatives. With its prime location at 40th and Walnut, Penn explored several redevelopment options such as retail use, a radio station, and restaurant. While pursuing redevelopment options, Penn’s real estate officials responded to the ideas put forth in a 1998 Urban Studies seminar led by Dr. Ira Harkavy and Dr. Lee Benson at the University, which called for the formation of The Foundation Community Arts Initiative. By making space available in a portion of the building, the Foundation held their first event in 1999 producing a free, all ages Jazz concert open to the public. Utilizing the programming and performing talents of both students and other West Philadelphia community members, The Foundation, led by an undergraduate student, Andrew Zitcer, quickly began programming weekly events and monthly series, showcasing world music, Jazz, Rock, Experimental, and more, while consciously striving to unite diverse groups of people through arts and culture experiences. By 2002, The Foundation, primarily fueled by dedicated Penn students with the aid of performers, artists, activists, and event organizers from within the surrounding community, acknowledged the need for a full time Director of The Rotunda. The appointment of a venue Director allowed an increase in the frequency of events while strengthening marketing efforts, outreach, and quality of programming. Nowadays, we use the name The Foundation interchangeably with the venue name of The Rotunda. Gina Renzi, a local event organizer, artist, and activist, was hired while Andrew Zitcer accepted a position at Penn’s Office of Student Life, programming Perelman Quadrangle and other campus spaces in addition to advising on all facets of The Rotunda and serving as an liaison between The Rotunda and Penn. In January 2004, Andrew went on to become the Cultural Asset Manager at Penn’s Division of Facilities and Real Estate Services (FRES). In this position, he oversaw and assisted to cultivate existing and new venues and projects within the FRES arts and culture portfolio. The appointment of a Director allowed an increase in the frequency of events while strengthening marketing efforts, outreach, and quality of programming.

Land Acknowledgement: We recognize and acknowledge that The Rotunda and related programs stand on the Indigenous territory known as “Lenapehoking,” the traditional homelands of the Lenape, also called Lenni-Lenape or Delaware Indians. These are the people who, during the 1680s, negotiated with William Penn to facilitate the founding of the colony of Pennsylvania. Their descendants today include the Delaware Tribe and Delaware Nation of Oklahoma; the Nanticoke Lenni-Lenape, Ramapough Lenape, and Powhatan Renape of New Jersey; and the Munsee Delaware of Ontario. These are not only nations of the past, but are indeed living, thriving people today. Learn much more about these and other communities at Native American and Indigenous Studies at Penn: https://nais.sas.upenn.edu

THE ROTUNDA’S PLACE AT PENN

The Rotunda is part of the University of Pennsylvania Facilities and Real Estate Services Arts Portfolio (FRES ARTS). FRES ARTS unites a set of cultural assets that exist along the 40th street corridor and elevate the quality of life for Penn and University City by providing access to the arts for multiple communities. The FRES ARTS portfolio includes an artist in residency program, an art gallery, studios, performance and screening space. These static programs are joined by annual festivals that bring tens of thousands of patrons per year to the area, enlivening the street and making the area safer and more inviting. The FRES ARTS assets support the academic mission of Penn by providing laboratories for academic experimentation and beyond the classroom learning. They support the social mission of the University by providing greater access to Penn’s real estate assets to the culture community. And the economic mission of the University is served as the arts form a strong co-tenant for the vibrant retail destination that is 40th Street.

The majority of our 300+ events per year happen in the now-legendary space in the back (AKA the back space or main room), which has hosted artists such as: Matisyahu, Spoon, John Legend, Wiz Kalifa, and other stars, while always focusing on grass roots, city and neighborhood-based artists, activists, students, and community leaders. Very few venues can claim such a diverse roster. One night may offer an Appalachian folk concert; the next a hip hop showcase; the next a gong orchestra; the next a block captain gathering and student film series...and so on.


Accessibility: The entrance that we use most often is on the left side of the building toward the back. There are six steps up into the building.
The building is equipped with a ramp for wheelchairs, strollers, and other devices. The ramp is on the right side of the building toward the back. Take the concrete path from Walnut Street and you'll find the ramp. Once inside, make a right into the hallway and then make a left at the restroom. This entrance is kept locked except during events. The venue has a ramp onto the stage as well as an ADA accessible restroom on the first floor. This restroom serves one person at a time and is also equipped with a changing station. All of our restrooms are gender-neutral.


As of Summer 2022, our seating capacity is 75. This may return to pre-pandemic numbers at some point so stay tuned. Current standing room capacity is 100-175 depending on the room configuration.


We are still requiring everyone over the age of 2 to wear masks while inside the venue unless they are on stage, eating, or drinking. 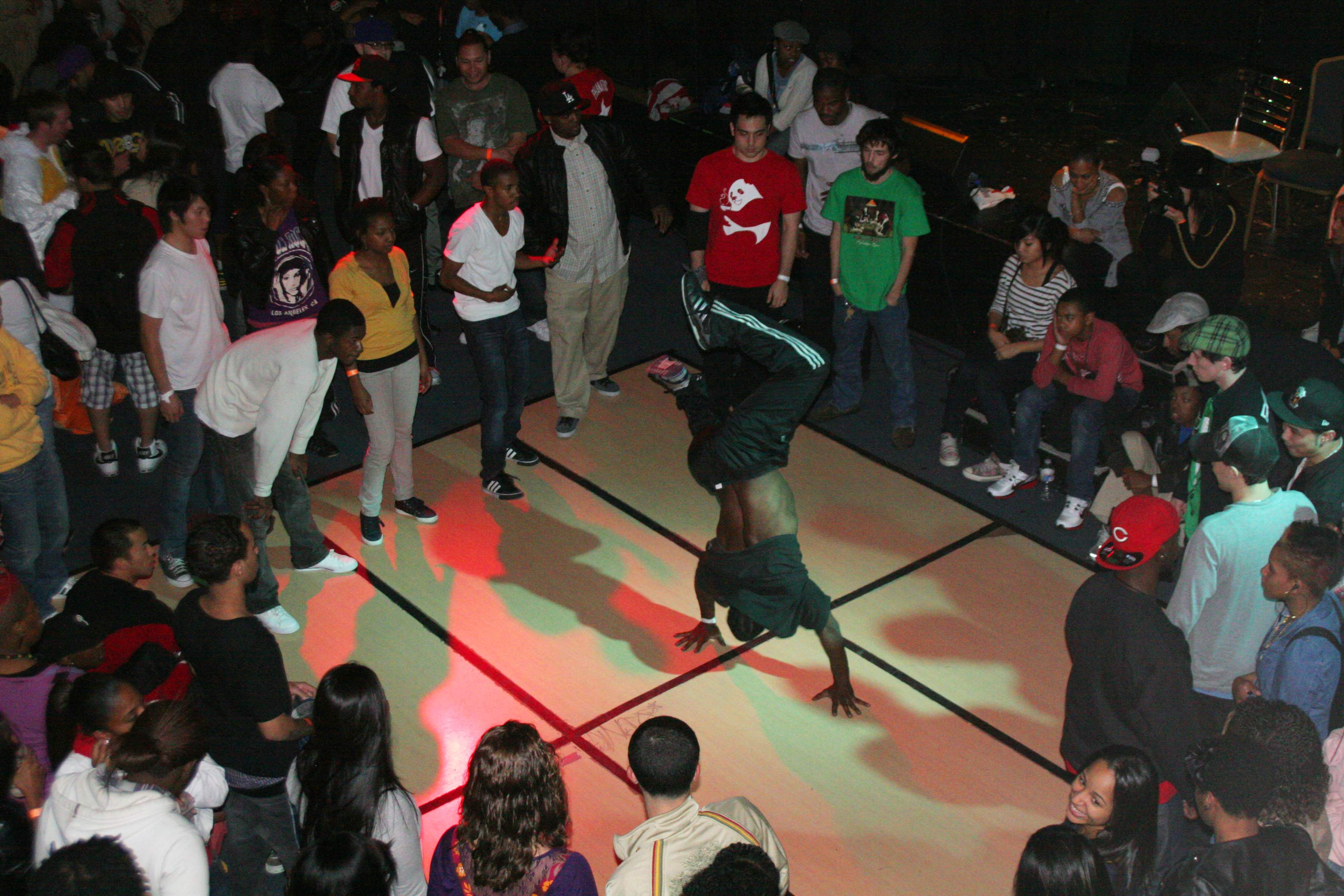 PLEASE NOTE: WE ARE NOT CURRENTLY ACCEPTING BOOKING INQUIRIES FOR THE SANCTUARY. WE ARE BOOKING THE MAIN ROOM/BACK SPACE ONLY AT THIS TIME.

The front space (AKA the sanctuary) is much larger than the main room, and gives the building its name. In fact, its dome is 80 feet in diameter, which is impressive in print but jaw-dropping in person. That said, artists and audiences are completely at home in this soaring architectural treasure, with its 1,500 pound Tiffany chandelier, pristine Walnut pews, and raked pine floor. We present a handful of events in this space every year, usually during citywide festivals such as Philadelphia Live Arts, Philly Fringe, Design Philadelphia, and Philadelphia International Festival of the Arts (PIFA). Artists who have performed in this grand space include: Anne-Marie Mulgrew & Dancers Co., Headlong Dance Theatre, Pig Iron, Leah Stein, Mendelssohn Club, DJ Spooky, Siobhan Davies Dance Co., EgoPo Productions, and Melissa Dunphy/Gonzales Cantata.

PLEASE NOTE: WE ARE NOT CURRENTLY ACCEPTING BOOKING INQUIRIES FOR THE SANCTUARY. WE ARE BOOKING THE MAIN ROOM/BACK SPACE ONLY AT THIS TIME. 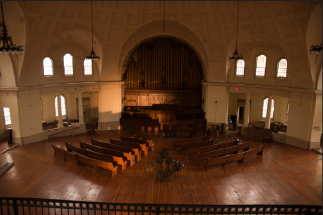