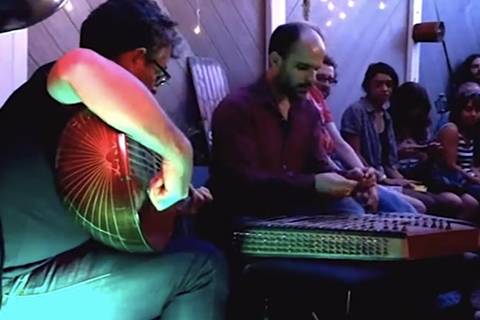 Trumpeter, santur player, vocalist, and composer Amir ElSaffar has distinguished himself with a mastery of diverse musical traditions and a singular approach to combining Middle Eastern musical languages with jazz and other styles of contemporary music.

ElSaffar is an expert trumpeter with a classical background, conversant not only in the language of contemporary jazz, but has created techniques to play microtones and ornaments idiomatic to Arabic music that are not typically heard on the trumpet. Additionally, he is a purveyor of the centuries-old, now endangered, Iraqi maqam tradition, which he performs actively as a vocalist and santur player. As a composer, ElSaffar has used the microtones found in maqam music to create an innovative approach to harmony and melody.

In addition to performing and composing, ElSaffar is Music Curator at Alwan for the Arts, New York’s hub for Arab and Middle Eastern culture, which hosts semi-monthly concerts and the annual Maqam Fest. In 2013, he collaborated with the Metropolitan Museum to create a festival of Iraqi culture in 2013. He also teaches maqam classes at Alwan, and is the director of the Middle Eastern Music Ensemble at Columbia University, where he also teaches jazz ensembles.

Omar Dewachi is an Iraqi-U.S. academic and musician based in Brooklyn. Trained in classical Iraqi oud and Iraqi Maqam music, Dewachi has performed in numerous concerts and festivals in Europe, North America and the Middle East. In addition to Iraqi and Arabic music, he is concentrating his musical activities in a variety of improvisational genres including free-improvisation, jazz, psychedelic and experimental music.

Admission is FREE [donations appreciated but not required] but we encourage you to RSVP to give us a sense of how many people to expect. Please RSVP at https://www.eventbrite.com/e/amir-elsaffar-omar-dewachi-solos-duo-tickets-449696423107