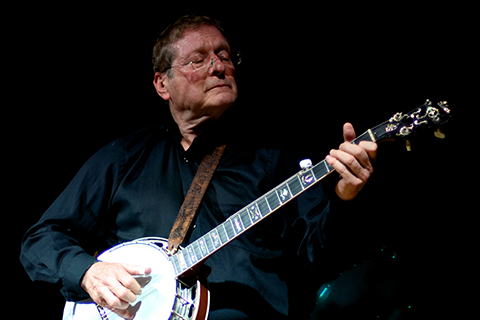 Bowerbird is pleased to present a rare performance by George Stavis, an American banjo player perhaps best known for his 1969 album Labyrinths , an album considered a landmark in the development of improvisational banjo performance. Opening the evening will be Elkhorn, the Philadelphia based guitar duo Jesse Sheppard and Drew Gardner, who are celbrating the release of their new album Distances , out this September 2022.

The guitar music of Elkhorn is rooted in the interplay of Jesse Sheppard’s twelve-string acoustic fingerpicking and Drew Gardner’s electric lead. Their music draws from folk, psych, blues, and jazz sources. This evening they will be joined by Ian McColm on drums, who plays on their new LP “Distances,” available September 16th on Feeding Tube Records. As Byron Coley writes, “This formation is capable of psyching-out with pure guitar force. The Ouroboran elements of open-form improvisation-based music really gel when the snakes are encouraged to eat their own tails.”

HEALTH & SAFETY
This is an “in person” event.   In consideration of the ongoing pandemic and the safety of those in our community, Bowerbird is requiring all audience members, staff, and performers to wear a mask while inside the venue (please note that musicians will have the option to perform without masks once on stage).