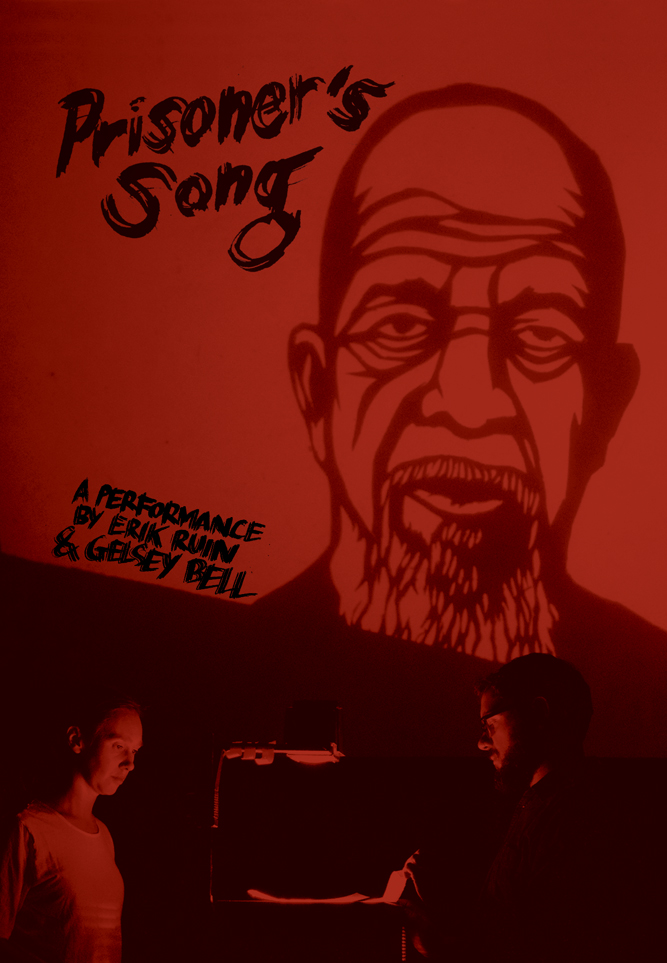 Dubbed "uncomfortably powerful by The New York Times, Prisoner's Song is a performance created by composer Gelsey Bell and visual artist Erik Ruin about the prison experience. Using shadow puppets and projections alongside a variety of musical idioms, the piece draws on historic ballads, poetry, audio interviews with people who have spent time in prison, and other primary sources to create a fragmentary encounter with the states of mind and heart prison engenders.

The performance will be followed by a brief talk-back with the artists and various contributors to the project, including Hakim Ali and William Goldsby of Reconstruction, Inc., LuQman Abdullah and Emily Abindroth.
ABOUT THE ARTISTS
Gelsey Bell (composer, performer) is a singer, songwriter, and scholar. She has been described by the New York Times as a "winning soprano" whose performance of her own music is "virtuosic" and "glorious noise." She has released multiple albums and her work has been presented internationally. She is a core member of thingNY and Varispeed. She has also worked with numerous composers, choreographers, and performance creators including Robert Ashley, Matthew Barney and Jonathan Bepler, Kimberly Bartosik, Ne(x)tworks, Dave Malloy, Rachel Chavkin, John King, Chris Cochrane and Fast Forward, Gregory Whitehead, Kate Soper, and Rick Burkhardt, among others. gelseybell.com
Erik Ruin (visual artist, performer) is a Michigan-raised, Philadelphia-based printmaker, shadow puppeteer, paper-cut artist, etc. His work oscillates between the poles of apocalyptic anxieties and utopian yearnings, with an emphasis on empathy, transcendence and obsessive detail. He frequently works collaboratively with musicians, theater performers, other artists and activist campaigns. He is a founding member of the Justseeds Artists' Cooperative. erikruin.com
Rick Burkhardt (director) is an Obie-award-winning playwright, performer, composer, songwriter, and director whose original chamber music, theater, and text pieces have been performed in over 40 US cities, as well as in Europe, Mexico, Canada, Taiwan, Australia, and New Zealand. He is a founding member of the Nonsense Company, a touring experimental music/theater trio, and songwriter/accordionist for the Prince Myshkins, a political cabaret/folk duo.

*Admission is FREE - an optional donation will be taken at the door to benefit Reconstruction, Inc., who work to effect social change by forging individuals who were formerly incarcerated into an organized community of leaders working to transform the criminal justice system, their communities, and themselves. reconstructioninc.org