In the Sanctuary! Morton Feldman: For Philip Guston (1984) performed by Either/OR 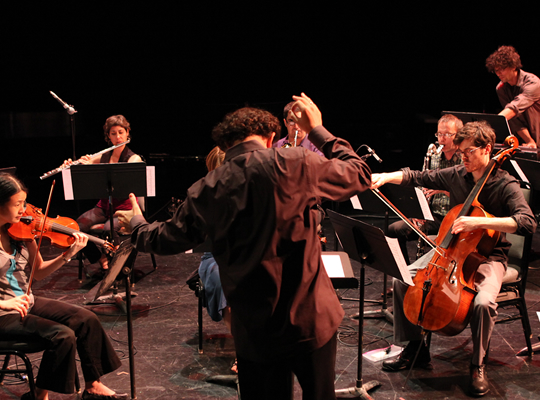 THIS EVENT IS IN our SANCTUARY space. PLEASE ENTER ON WALNUT STREET.
The event runs 3-7:30pm. You're welcome to come and go as you please, though the piece is best experienced for the entire four hours.

Bowerbird is excited to welcome back NYC based ensemble Either / OR to perform "For Philip Guston", Morton Feldman's late period masterpiece for piano/celesta, flute, and percussion. Upon hearing this expansive 4+ hour work, noted music critic Alex Ross wrote, "What makes "Guston" fundamentally and wondrously beautiful is its harmony. Feldman's whole career was a search for ways to string together lovely chords, and "Guston" contains some of his most lustrous inventions. He is careful to parcel them out economically, so that they arrive as gratifying shocks after stretches of more neutral sound.These islands of beauty are like suggestions of figuration at the center of an abstract painting." This performance will take place in the Rotunda's magnificent domed sanctuary space.

Audiences are welcome to come and go as they please - but the work is best experience in its full duration. There will be pews and chairs available for seating, but audiences are encouraged to bring their own blankets and pillows to sit and lay on. Feldman is exceptional for that liminal space between sleep and awake.

ABOUT THE ARTISTS
Since 2004, Either/Or has been at the forefront of New York's contemporary music scene, programming new and recent works for unconventional ensembles or soloists that are rarely heard elsewhere. Equally informed in American experimentalism and in the European avant-garde, Either/Or collaborates with emerging and established artists from a broad aesthetic spectrum. Performances throughout the Northeast, including Philadelphia Museum of Art, ICA Boston, Miller Theatre, The Kitchen, and venues across NYC, as well as frequent appearances at experimental music venues such as The Stone, Roulette, and ISSUE Project Room.

Morton Feldman (1926 - 1987) was an American composer, born in New York City. A major figure in 20th century music, Feldman was a pioneer of indeterminate music, a development associated with the experimental New York School of composers also including John Cage, Christian Wolff, and Earle Brown. Feldman's works are characterized by notational innovations which he developed to create his characteristic sound: rhythms which seem to be free and floating; pitch shadings which seem softly unfocused; a generally quiet and slowly evolving music; recurring asymmetric patterns. His works after 1977, including For Philip Guston explore extremes of duration.

As a child he studied piano with Vera Maurina Press, who, according to the composer himself, instilled in him a "vibrant musicality rather than musicianship."Feldman's first composition teachers were Wallingford Riegger, one of the first American followers of Arnold Schoenberg, and Stefan Wolpe. In early 1950's he met John Cage in the lobby of the New York Philharmonic and the two composers quickly became good friends, with Feldman moving into the building Cage lived in. Through Cage, he met painters Richard Lippold (who had a studio next door), Sonia Sekula, Robert Rauschenberg, and Philip Guston. In a lecture to German students the composer remarked, "If you don't have a friend who's a painter, you're in trouble."

Admission is FREE.  Audiences are free to come and go as they wish. The event runs 3pm-7:30pm.