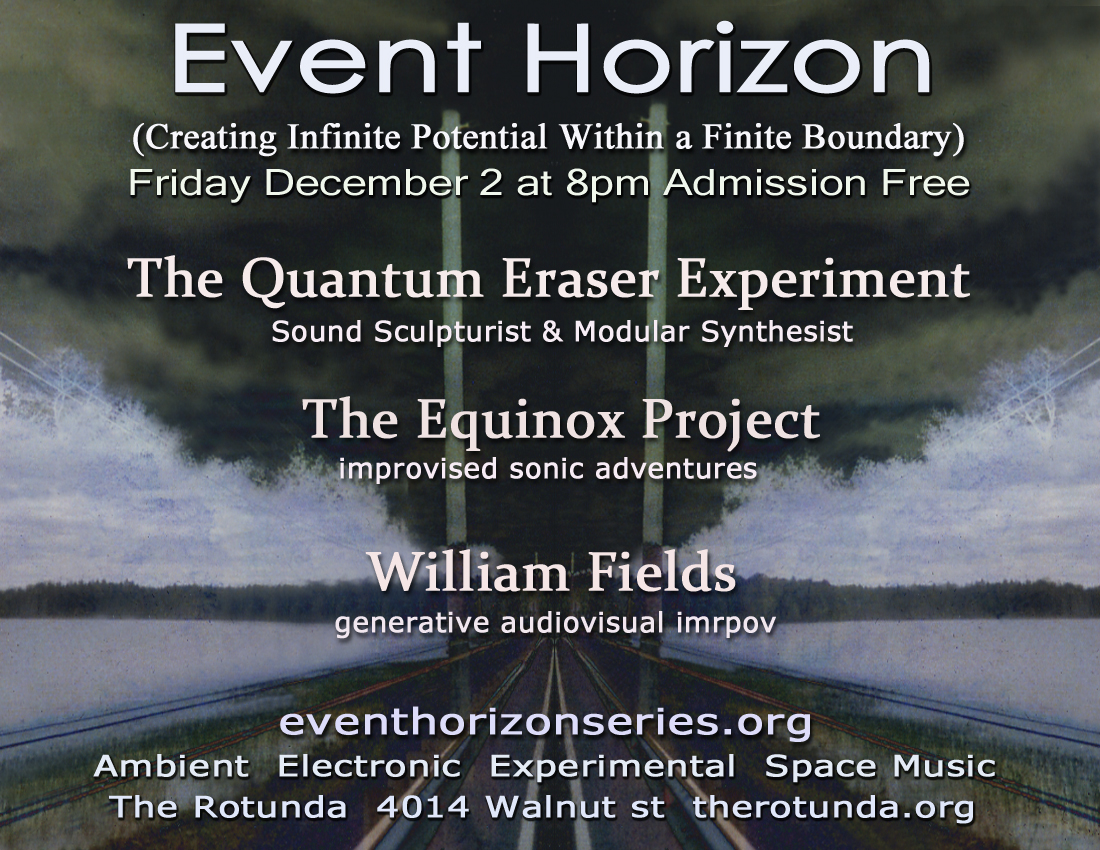 The Equinox Project is the meeting of acoustic and electronic, with the electric guitar representing the nexus of both. It was conceived on the autumnal equinox, the day of meeting for the summer and winter halves of the year, the day of equal parts darkness and light.

William Fields (b.1977) is an artist and musician from the Philadelphia area whose work explores the intersection of algorithmic composition, improvisation, and audio-visual correspondence. William graduated from the University of Delaware with degrees in Computer Science and Philosophy. He has been making electronic music for over 30 years and generative visual art for more than 10 years. Recently William has focused on developing his own unique audio-visual performance system. This system can instantly generate music using a set of custom algorithms. This process of “augmented creativity” facilitates the discovery of new and interesting musical possibilities. William steers the system in real time, sculpting the music through improvisation. A visual representation of the music is also generated by the system, creating a synesthetic experience through tight correspondence between music and visuals. William’s music has been released internationally on labels such as Conditional (DE), SUPERPANG (IT), Tokinogake (JP), ding\ndents (KR), Kaer’Uiks (DE), 3OP (FR), and New York Haunted (NL). He has performed live throughout the United States and Canada. His work was selected and choreographed for dance as part of the International Computer Music Conference (ICMC). His recent project FieldsOS, an algorithmic music radio show consisting of 24 hours of original computer-generated music, received wide acclaim within the electronic music community.

The Quantum Erasure Experiment aka Dan Hamilton, grew up in a house where his mother and sister played the piano day and night. Without any formal training he began to emulate what he heard. It was due to his lack of musical training that he was forced to learn how to play by ear. In doing so, his ability to pick apart the sounds that he heard grew over time. In the early 2000’s he was able to combine his love and knowledge of electronics with his love of sound. With the resurgence of modular synthesizers, he was able to acquire the hardware tools he needed to be able to carve up and manipulate different sounds at will. It was at this point that The Quantum Eraser Experiment was born. Playing under this persona, he eliminated all predefined genre rules and instead plays completely improvisational and reacts to what he is hearing instead of playing something predetermined. This makes every performance unique and completely unexpected to him and the audience. The outcome of playing this way could turn out great or terrible, but it’s always interesting. He has played live shows in NYC and is a regular performer on WLFR 91.7 FM Stockton University and WPRB 103.3 FM Princeton,